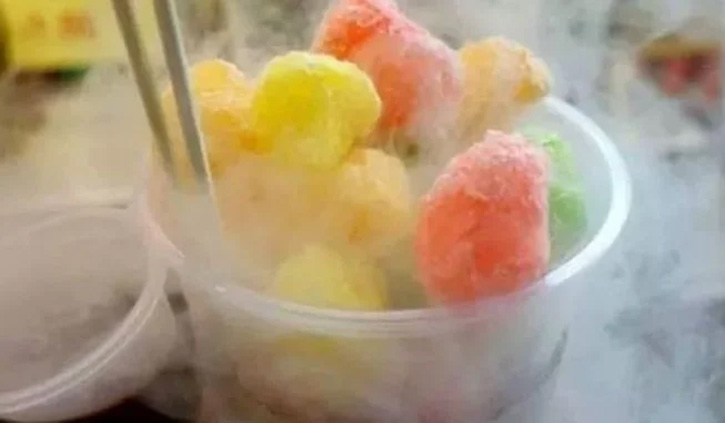 Potential of liquid nitrogen to cause intestinal burns and perforations.

Commonly known as ‘dragon’s breath’ in Indonesia, chiki ngebul is an assortment of rainbow-colored candies coated in a cloud of liquid nitrogen mist that causes the person eating them to exhale that mist, like a dragon. However, health experts warn that if the snack is consumed before the liquid nitrogen has evaporated, it poses a very real risk of intestinal burns and perforations. So far, over 20 kids have been diagnosed with stomach burns after allegedly filming themselves eating chiki ngebul as part of a dangerous TikTok trend.

The Deputy Governor of West Java, Uu Ruzhanul Ulum, recently banned the sales of the liquid nitrogen-infused snacks after over a dozen kids reportedly suffered intestinal burns caused by chiki ngebul consumption. He also urged local authorities and school officials to check the ingredients used by street vendors and make sure they are safe for kids.

Dr. Dicky Budiman, an Indonesian doctor and researcher of global health security at Griffith University, confirmed the potential of liquid nitrogen to cause intestinal burns and perforations and warned that, due to the online popularity of chiki ngebul, the number of affected children could be much higher than reported.

The controversy surrounding the band of chiki ngebul in Indonesia sparked a heated online debate, with those opposing the measure claiming that the liquid nitrogen-infused candy had been sold on the street for years without any reported accidents. They say that video-sharing platforms like TikTok, which encourage youths to take part in all sorts of dumb challenges bear most of the blame.