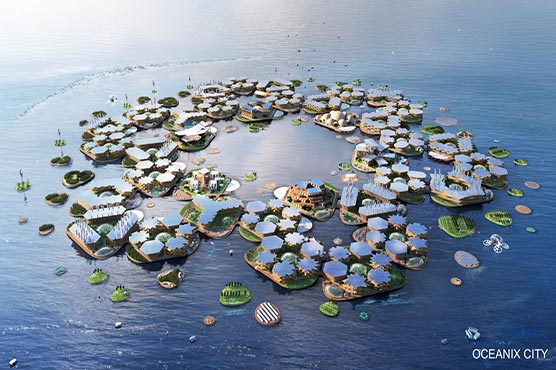 (Web Desk) – The United Nations (UN) on Wednesday backed a concept for building an affordable floating city that could help protect people from sea-level rise while addressing the lack of affordable housing in major cities.

At a UN roundtable talks, a group of builders, engineers, and architects debuted a concept that was once seemed like the moonshot vision of tech billionaires and idealistic architects.

Unlike instances in the past, when these futuristic designs have been met with scepticism, the executive director of the United Nations Human Settlement Programme (UN-Habitat), Maimunah Mohd Sharif, said the UN would support and shepherd this project to fruition.

"Everybody on the team actually wants to get this built," said Marc Collins, the CEO of Oceanix, a company that builds floating structures. "We’re not just theorising."

The company believes a floating city project would address both dire housing shortages and threats from rising sea levels.

The structures themselves would be designed to withstand all sorts of natural disasters, including floods, tsunamis, and Category 5 hurricanes.

The concept, known as Oceanix City, was designed by renowned architect Bjarke Ingels in collaboration with Oceanix.

Though it still needs funding, it’s essentially a toolkit for investors brave enough to take on the project. 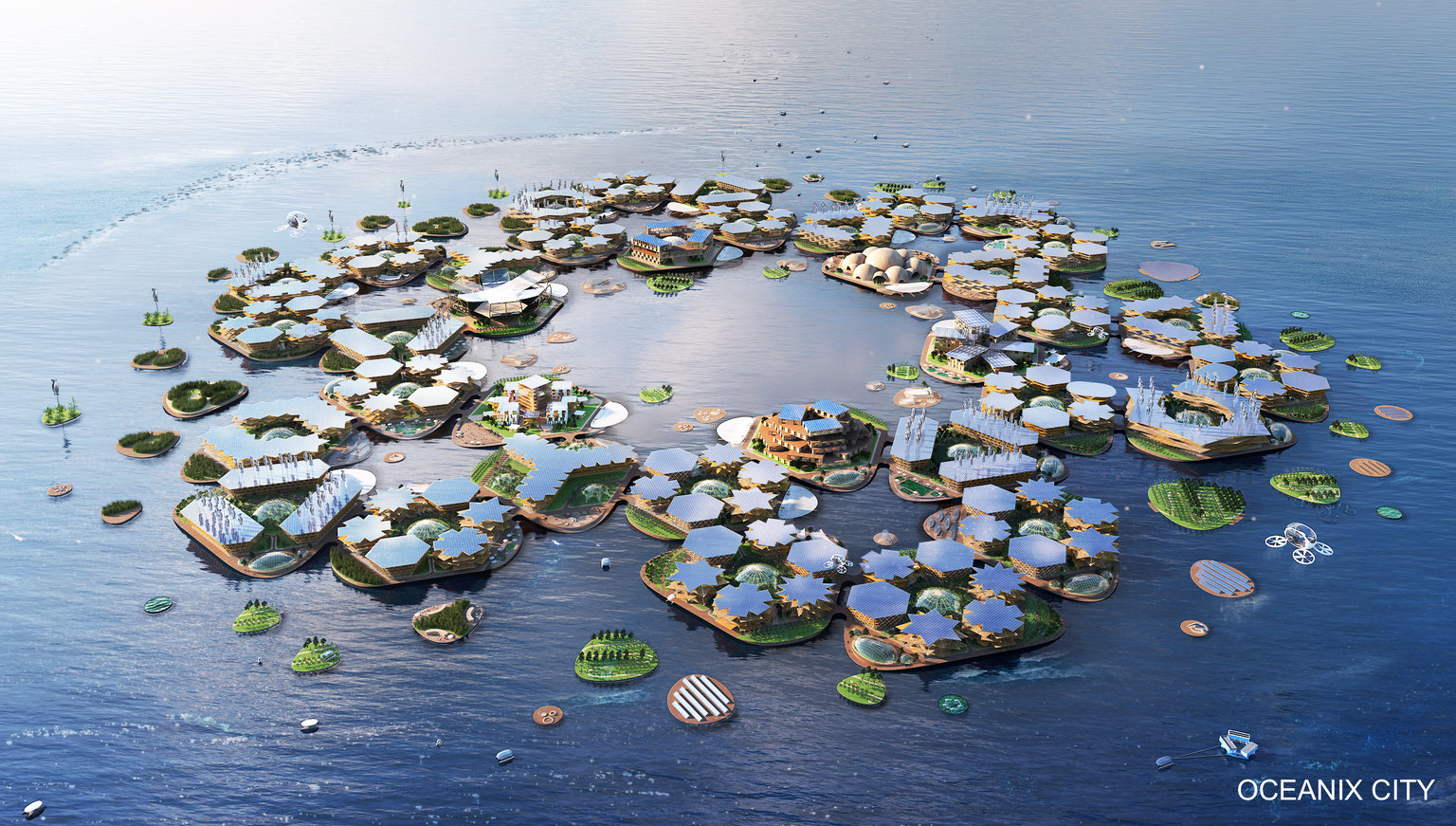 The city would essentially be a collection of hexagonal platforms that can each hold around 300 residents.

Hexagons are widely considered one of the most efficient architectural shapes. (Think of the orderly inside of a beehive.)

By designing each platform as a hexagon, the builders hope to minimise their use of materials. 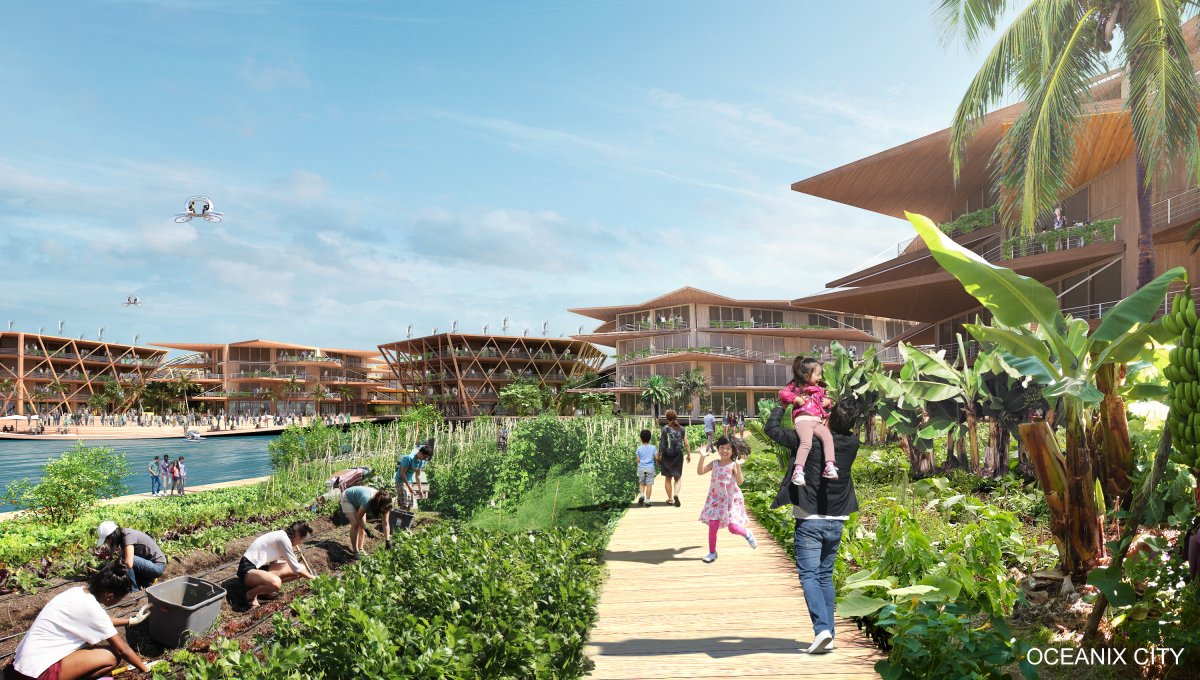 The designers consider a group of six platforms to be a "village." The entire city would contain six villages, for a total of around 10,000 residents.

Ingels is best known for individual projects like the Superkilen public park in Copenhagen or a pair of twisting towers in New York City. But he asserted that designing an entire city gives him room to expand his vision. 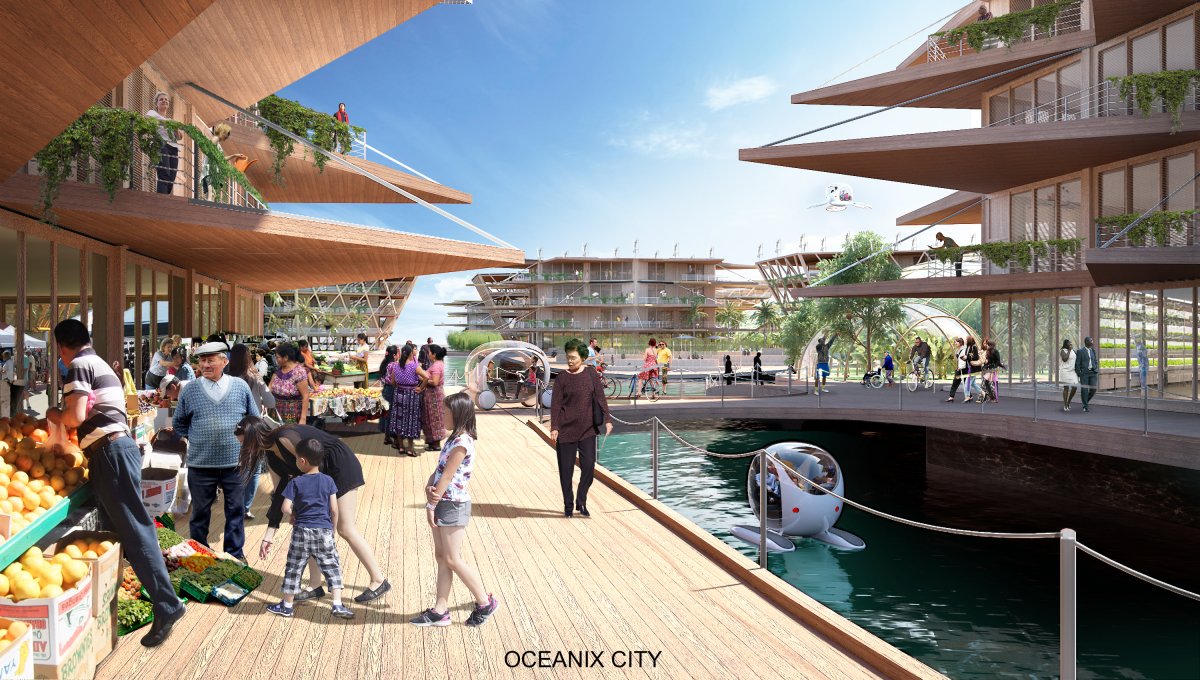 "At the city scale you can achieve more," Ingels said.

The villages wouldn’t allow any high-emitting cars or trucks. 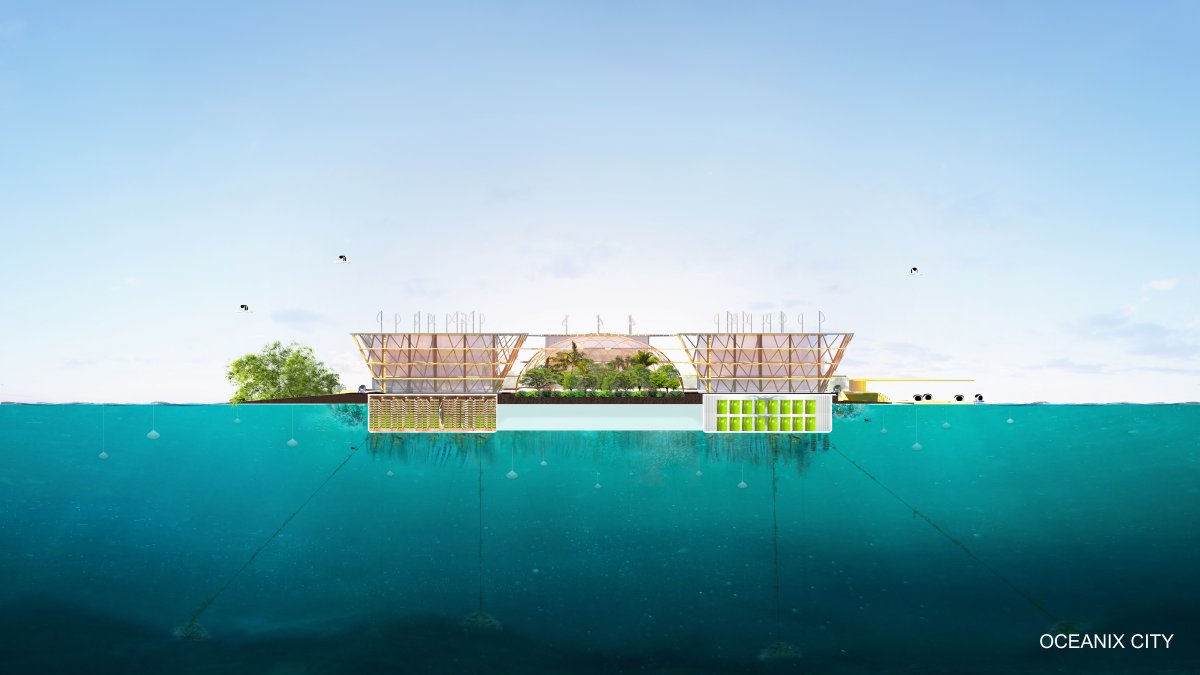 The city would not contain any garbage trucks. Instead, pneumatic trash tubes would transport garbage to a sorting station, where it could be identified and repurposed.

"This doesn’t look like Manhattan," Collins told the UN. "There are no cars."

The design might allow for driverless vehicles, however, and the city could experiment with new technologies such as drone deliveries. 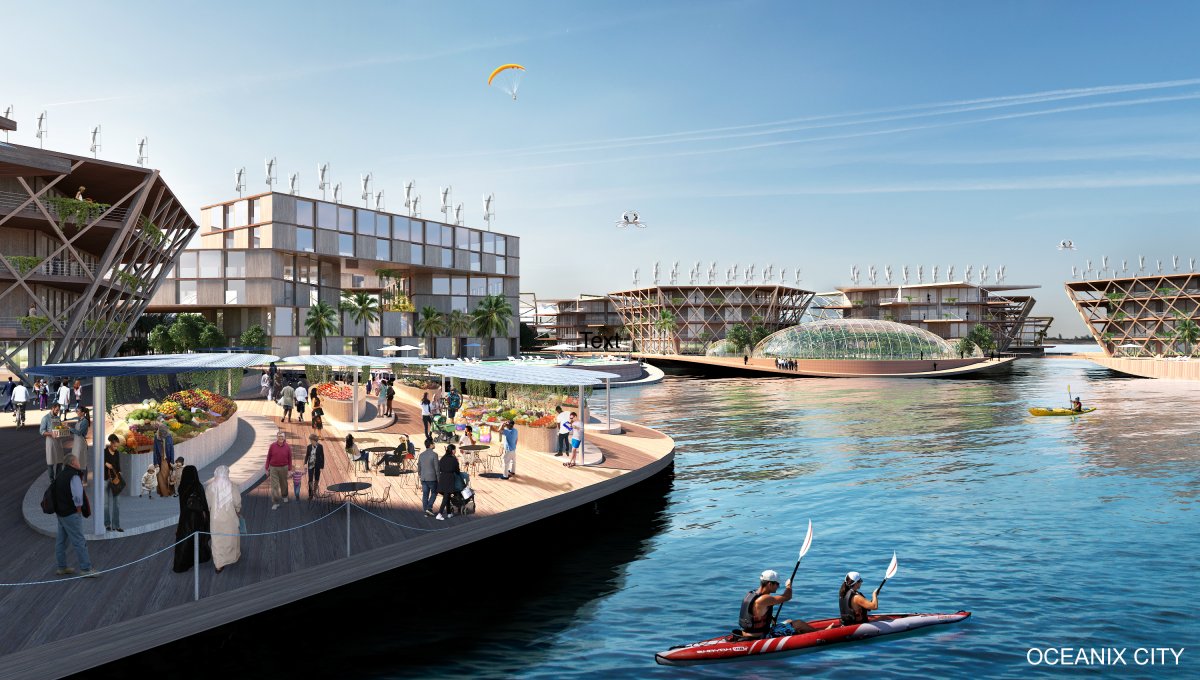 The concept calls for "ocean farming," which would involve growing food beneath the surface of the water.

Cages underneath the platforms could harvest scallops, kelp, or other forms of seafood. Aquaponic systems would use waste from fish to help fertilize plants, while vertical farms would generate year-round produce. Both of these technologies could also help the city remain self-sufficient during a hurricane or other natural disaster.

Overall, the goal is to reduce waste and produce all the food necessary to feed the city’s inhabitants. 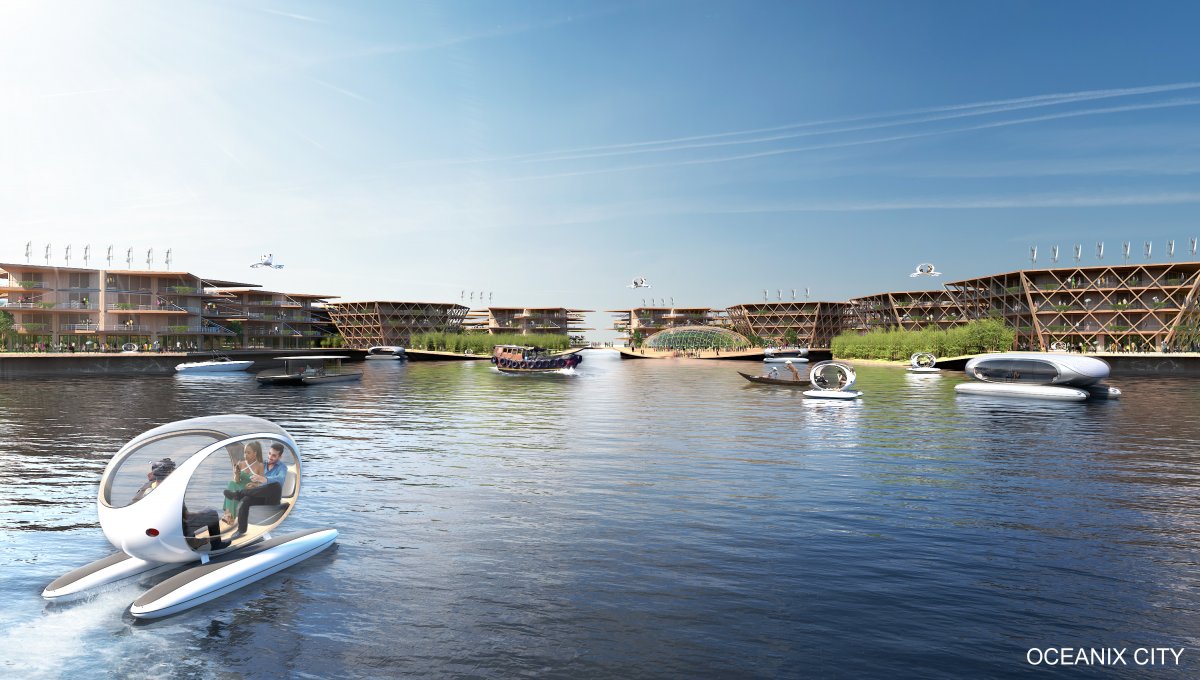 Though it’s referred to as a "floating city," the community would actually be moored to the ocean floor.

Oceanix envisions the villages within about a mile of major coastal cities. The platforms could also be towed to safer locations in the event of a disaster.

The platforms would be bolstered by Biorock, a material created by exposing underwater minerals to an electric current. 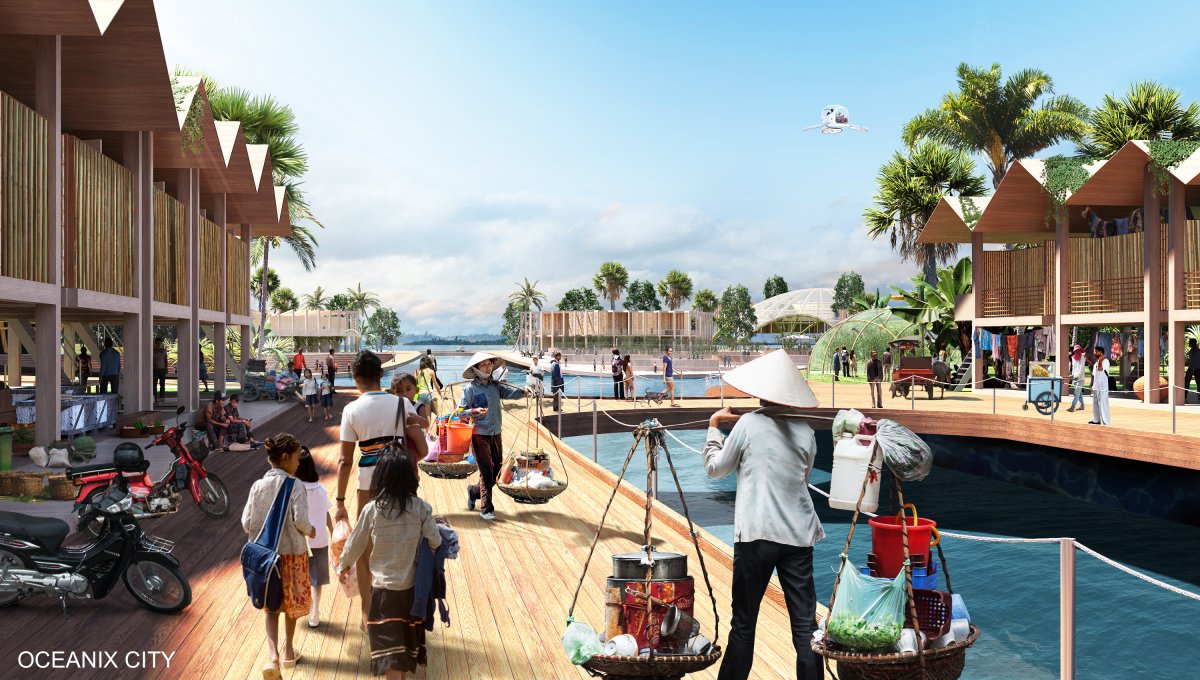 This leads to the formation of a limestone coating that’s three times harder than concrete, but can still be made to float.

The substance becomes stronger with age and can even repair itself as long as it’s still exposed to the current. This allows it to withstand harsh weather conditions.

The city could also contain an aquifer system that pulls clean water out of the air.

"Cities really start and fail by how well they manage water," engineer Bry Sarte told the UN on Wednesday. 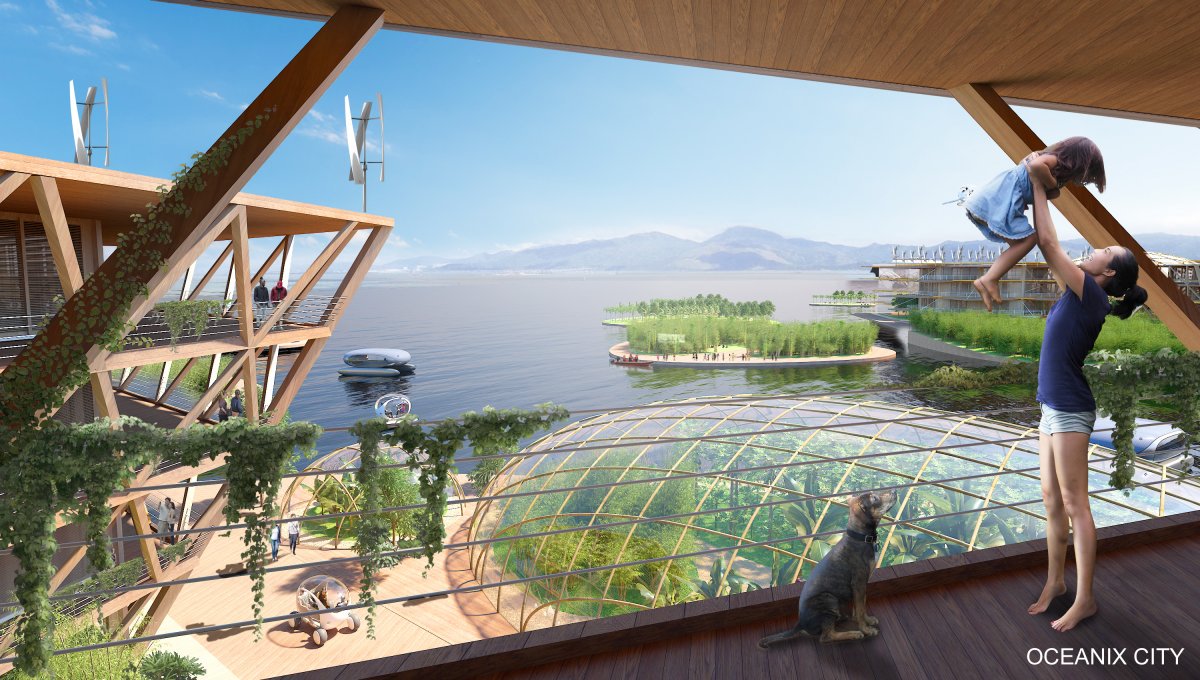 In a disaster scenario, machine generators could pull air from the atmosphere, condense it into water, and filter it for impurities like metal or bacteria.

The city would not contain any high-rises. To keep a low center of gravity, buildings would be between four and seven stories.

In addition to homes, the city would feature a spiritual center, cultural center, and communal library, where residents could rent computers and bicycles as well as books.

All buildings would be constructed out of sustainable materials like timber and bamboo. They’re also designed to be disassembled so that future generations of architects can reconfigure the concept. 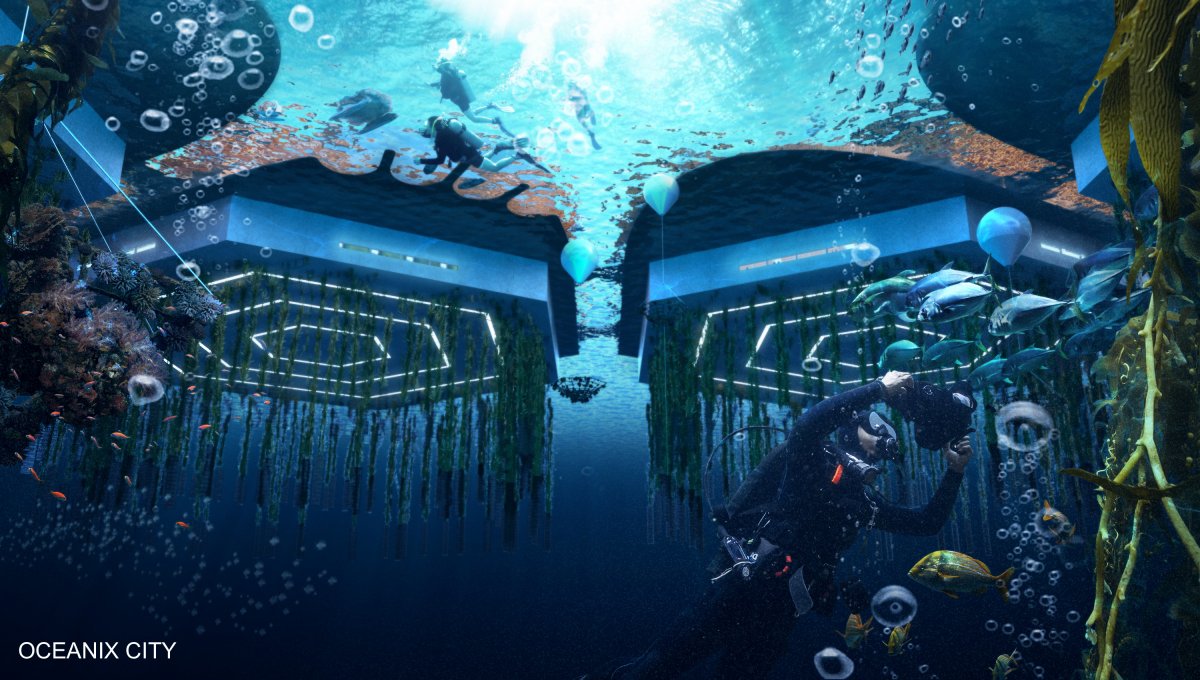 The designers recognise, of course, that most people will continue to live on land in the future.

Ingels referred to his vision for the city as "utopian pragmatism" – the idea that we can accomplish grand design feats in concrete, practical ways.

Not everyone would be amenable to living on water, of course, but those who can’t afford high rents in major cities or who want a living situation that’s less vulnerable natural disasters could benefit from the concept.

Floating homes might even have a calming effect. Ingels said he lives on a decommissioned ferry, and the rocking helps lull his son to sleep.

People would "never sleep better than they [would] on a floating island," he said.

Pulling off a floating city concept is difficult, but within reach. It’s somewhat akin to landing on the Moon.

"I see this, in many ways, as our Apollo 10 dress rehearsal," Victor Kisob, the deputy executive director of UN-Habitat, told the roundtable.

This vision was shared by many of the project’s designers, including Ingels.

"This is essentially about exploration," he maintained. "It’s going to serve as an amazing prototype experiment for some of the challenges you’re going to face on Mars." 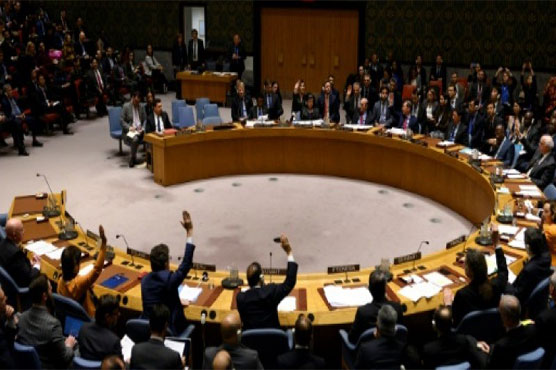 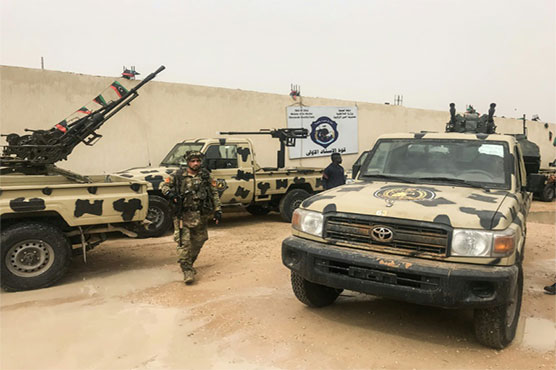 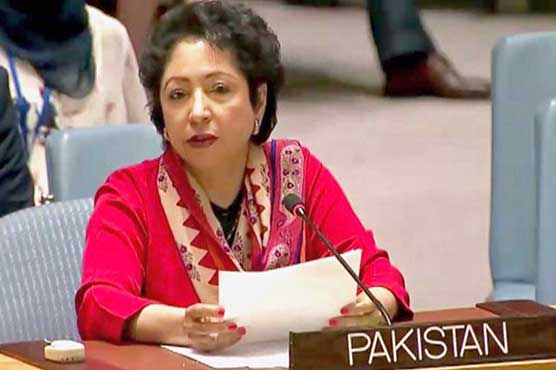 UNSC should fulfil its responsibility on Kashmir: Maleeha 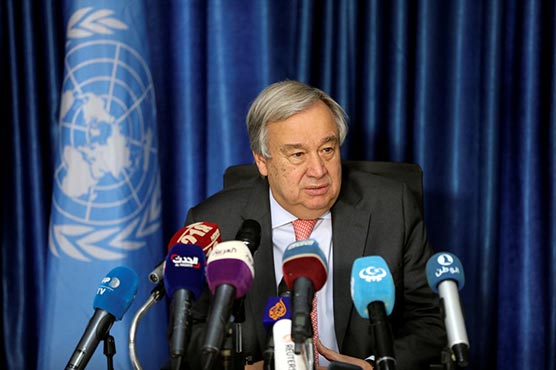