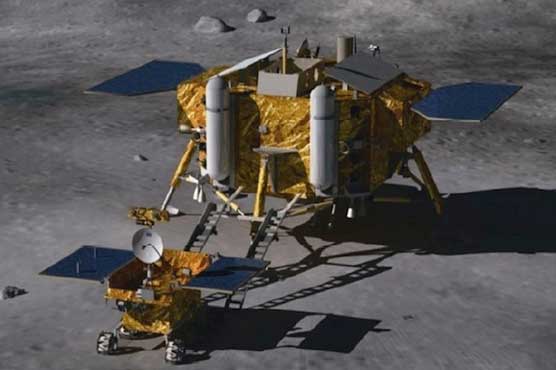 Display of the rover came on the same day that India was due to launch its first mission to Mars.

SHANGHAI (AFP) - China offered a rare glimpse into its secretive space programme on Tuesday, displaying a model of a lunar rover that will explore the moon s surface in an upcoming mission.

Beijing has ambitious space goals, including plans to send its first probe to land on the moon by the end of this year, state media reported in August.

The gold-coloured rover model, with six wheels and wing-like solar panels, attracted admiring crowds at the opening of the China International Industry Fair in Shanghai.

The rover s designer, Shanghai Aerospace Systems Engineering Research Institute, said the real thing would be lifted aloft by a Long March 3B rocket scheduled to be launched in early December.

Beijing sees its military-run space programme as a marker of its rising global stature and growing technological might, as well as the ruling Communist Party s success in turning around the fortunes of the once poverty-stricken nation.

The showcasing of the rover came on the same day that India was due to launch its first mission to Mars, aiming to become the only Asian nation to reach the Red Planet.

The Shanghai-based institute, a unit of China Aerospace Science and Technology Corp., which is linked to the military, claimed several technological breakthroughs with the rover.

Advances include its "autonomous" navigation system and the way the wheels are able to grip the powdery surface of the moon, according to materials from the institute.

It can climb inclines of up to 30 degrees and travel up to 200 metres (yards) per hour, it said.

"It s incredible to think that a little machine like this will actually go to the moon soon," said Lu Hui, who was among the crowd looking at the model rover.

"I think it s cute, kind of like WALL-E," she said, referring to the animated robot in the 2008 children s film of the same name.

China s official Xinhua News agency is hosting an online poll to select the rover s name, with "Seeking Dream" in the lead on more than 560,000 votes.