Messi brings Argentina to life, but can he match Maradona? 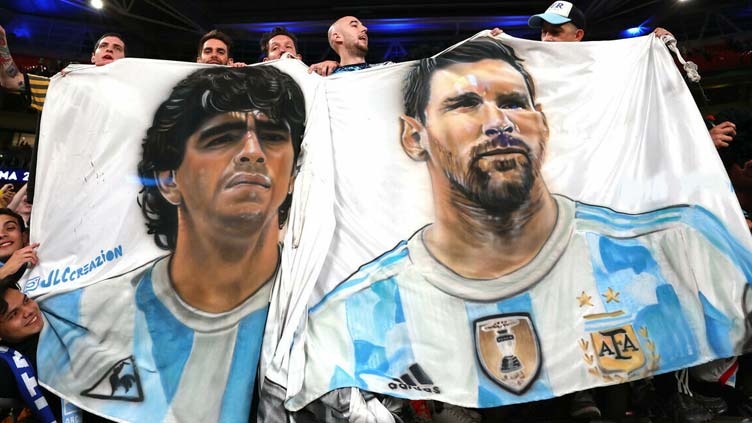 Messi brings Argentina to life, but can he match Maradona?

LUSAIL (Reuters) - Lionel Messi drew level with Diego Maradona’s number of World Cup goals and appearances on Saturday, but the current No. 10 knows that only winning the trophy at long last will earn him the same eternal love of his fellow Argentines.

In the twilight of a career played out in the larger-than-life shadow of Maradona - who won the 1986 World Cup almost single-handedly - Messi is desperate to also lift the trophy on his fifth and final attempt.

The 35-year-old captain has certainly done his share so far in Qatar, scoring two of Argentina’s three goals.

One was a penalty in their embarrassing 2-1 upset by Saudi Arabia, the other a trademark low strike to ignite Argentina’s tournament with a 2-0 win over Mexico on the day he matched both Maradona’s 21 World Cup appearances and his eight goals.

Argentines have often found it harder to love Messi than Maradona given his departure to Spain as a boy, his more introverted demeanour and, of course, his lack of a World Cup.

But the way he has run to celebrate his goals with fans in Qatar, in a joyous release of the obvious pressures on him, shows that love is well and truly in the air on both sides.

Arguably, Messi has had a more productive career than the flamboyant Maradona, whose off-field antics and drug problems eventually overshadowed his talent.

At his club from childhood, Barcelona, he scored a record 672 goals and helped win 35 trophies, including 10 La Liga titles and four Champions League trophies, before last year’s tearful move to Paris St Germain.

But unless he is persuaded to play another World Cup, which he has said he will not and may anyway be too old for, Qatar is his last chance to add the biggest prize to his trophy cabinet.

In truth, Messi and Argentina have not looked like world beaters yet. Against Saudi Arabia, they succumbed to a simple offside trap all too easily, then collapsed defensively for five minutes in the second half to let in two goals.

Against Mexico, they looked clueless in the first half, outmuscled, out-thought and overrun in midfield.

Mexican fans whistled in derision and the massed ranks of Argentines shook their heads when early in the second half, at 0-0, Messi lined up a free kick at a perfect distance only to sky it over and then seconds later hit a stray pass out of play.

Minutes later, however, normal service resumed with a long, low shot into the net to leave Argentines dreaming of a third World Cup. Thousands of fans stayed behind long after the end, with flags, banners and shirts bearing Messi’s face and number.

One showed the great Maradona, who died two years ago aged 60, beaming down on Messi from heaven. The other showed the two of them walking into the sunset, each holding a World Cup.

The dream is still on.