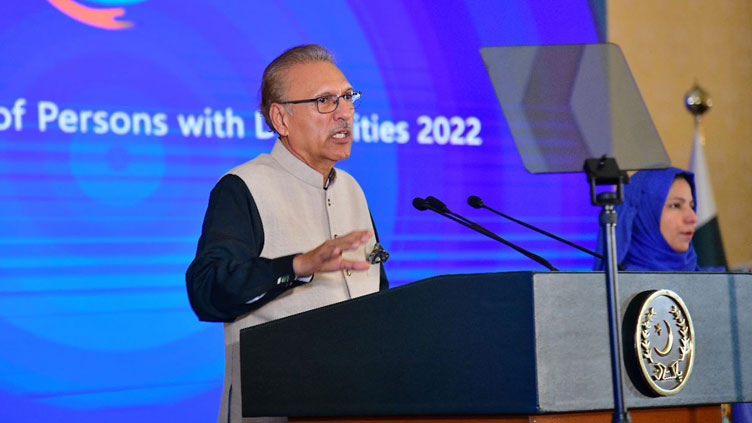 ISLAMABAD (Dunya News) – President Dr Arif Alvi on Thursday said that the armed forces were committed to perform their mandated functions as per the Constitution, therefore, all the politicians should commit themselves to democratic means of negotiations, consultations and deliberations to achieve consensus on issues confronted to the nation and reduce political polarization to achieve financial and economic stability in the country.

He said that in the past the superpowers adopted the doctrine of Mutually Assured Destruction, which diverted resources of the world towards meeting and developing more lethal weapon systems. He said that even if a fraction of these resources were diverted, the poverty and hunger in the world could have been eliminated as well as the effects of climate change could have been mitigated.

Alvi added that democracy, military defence, information and communication security, and economic independence were essential elements for a comprehensive defence of the country.

The president said that the Constitution of Pakistan safeguarded the rights of all the citizens equally irrespective of their social status, wealth or influence, adding that justice should be served promptly and cheaply without any discrimination which would help the country to move forward on a fast-track basis.

President Alvi said that information was another vital element of national security as disinformation could be used to destroy the country and mislead innocent populations. He said that disinformation regarding Weapons of Mass Destruction led to a major conflict in the Middle East, which resulted in the loss of many precious lives and the destruction of property and assets.

He stated that Pakistan acquired nuclear deterrence, which provided the country relief and a credible defence system for 20 to 30 years but with the advent of cyber security, the entire defence system paradigm had changed.

President Alvi said that concrete steps should be taken to safeguard the national assets from cyber security attacks and a system should be set in place for countering any future cyber-attacks in the country. He urged the higher education Institutions to avoid refusing admission to students in the major institutions of the country, adding that all aspiring students should be given admission to increase the number of persons with higher education.

The Higher Education Commission should take decisive and concrete steps to increase the capacity and capabilities of Higher Education Institutions by adopting out-of-the-box solutions and bringing in hybrid and online teaching systems to ensure that all aspiring students could be accommodated in the higher education system, he remarked.

Talking about population control, he said that there was a need to remove taboos attached to the preventive methods of population control and ensure the availability of contraceptives. This, he said, could reduce unwanted pregnancies, which were 50% of the total pregnancies that takes place in the country.

The Director General of ISSI, Ambassador Aizaz Ahmed Chaudhary, briefed the participants about the issues discussed at the conclave. He informed that discussions were held on topics such as defence and security, the search for peace in South Asia, Pakistan’s economic frontiers, the pursuit of geo-economics, and Pakistan’s human and economic security. Keynote Speaker, F.S Aijazuddin, termed population as the major issue on the internal front whereas relations with India were the major issue on the external front. He also highlighted the major challenges in the way of enhancing regional connectivity.