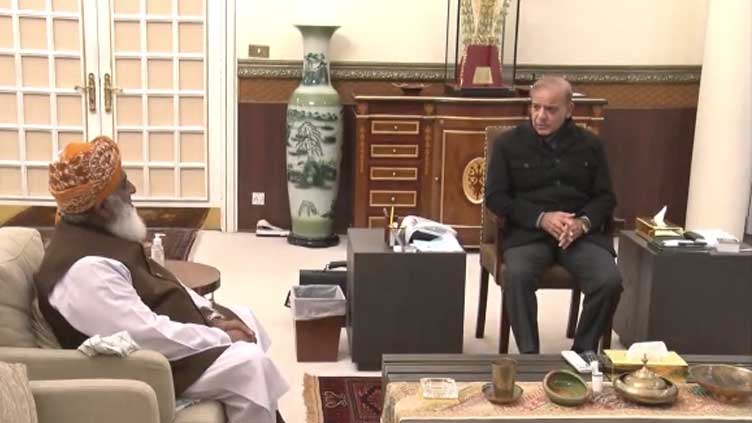 Sources privy to the matter said that both bigwigs met to discuss the ongoing situation in the aftermath of the Pakistan Tehreek-e-Insaf’s (PTI) decision to dissolve Punjab and Khyber Pakhtunkhwa assemblies.

During the meeting, PM Shehbaz said that the government is focusing on improving the country’s economic condition and soon the centre will provide relief to the masses.

Taking a shot at deposed Prime Minister Imran Khan, the PDM chief stated that he wants to create chaos in the country by dissolving assemblies.

While both leaders ruled out the PTI chief’s demand for early elections in the country and vowed not to accept any pressure.

Earlier on Monday, the PDM chief during a media talk in Peshawar while highlighting the western hypocrisy over Indian brutal actions said that the US has blind-sided itself from the Indian atrocities in the occupied Kashmir, adding that Our Parliament has supremacy and the right to legislate, no power in the world is allowed to pressurize Pakistan’s interior sovereignty.

Fazl said that they want to be considered equals in relations with the world, adding that Pakistan’s welfare is its top priority in its foreign policy. KPK has been ‘ruined’ and they will make every potential effort to stabilise the economy.

The JUI-F chief while taking a jibe at the deposed premier Imran Khan said that he is trying to hide his failed 10-year plan while ignoring the KP province masses, adding that every decision Khan had taken led to the destruction of the economy.