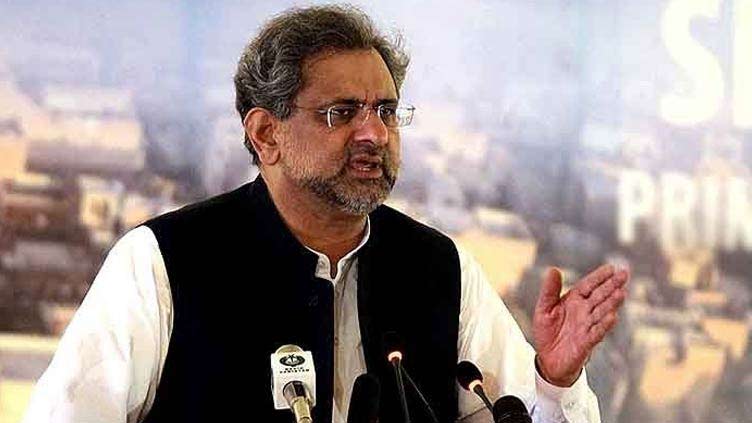 LAHORE (Dunya News) – Former prime minister and Pakistan Muslim League-Nawaz (PML-N) leader Shahid Khaqan Abbasi said on Monday that the issue of appointment of new army chief could go to court if name of a competent officer was not on the list of senior generals, which would be sent to the Prime Minister House.

Speaking exclusively to private TV channel on Monday, he said that the Prime Minister can appoint new Army Chief even if the summary doesn’t come or he can also summon summary with new names.

The PML-N leader said that the appointment of the new army chief was a normal process, and according to the constitution the summary would be sent to the prime minister and he would make the appointment.

“The issue could be challenged in the country if competent names would not be included in the list of generals,” he warned, adding that it is the responsibility of the defense secretary or the minister of defense to ensure that there is no such situation that the matter is challenged in the court.

The former PM went on to say that the PM has the right to pick any name from the list, adding that not sending a summary to the prime minister would be illegal and unconstitutional.

Defense Minister Khawaja Muhammad Asif on Monday informed the National Assembly that the Prime Minister’s letter for the appointment of new Chief of Army Staff (COAS) has been communicated to the General Headquarters (GHQ) by the defense ministry.

The process of appointment of new COAS will be completed in a couple of days, said the defense minister adding that after the new appointment the chaos will be subsided.

He requested the media to maintain the sanctity of the constitutional procedure of the appointment of the new army chief adding that the government will deal with PTI chief Imran Khan at the completion of the process.

Khawaja Asif said Imran Khan’s political tactics to come back in power are damaging the unity of the country and the nation along with the respect and sanctity of the institutions that supported him for four years unconditionally.

The institution after 75 years announced the univocal neutrality and returning to its constitutional role but Imran Khan is mocking or taunting the institute for its decision, said the minister. He said Imran Khan should be ashamed that he failed to deliver despite the unconditional support of the institution, instead of attacking on them.

The 70 years record of “Tosha Khana” is available many rulers bought gifts from “Tosha Khana” but Imran Khan is the first one who sold gifts in the market to make money, he added. “I am surprised to think about the morals and standards of Imran Khan’s followers” said the minister adding that Imran Khan was caught red-handed. He said Imran Khan blamed the United States of America (USA) for the vote of no-confidence against him but after a few months, he exonerated the USA from the blame.

Secondly, he blamed the Army, Intelligence agencies and establishment for supporting the opposition in a vote of no confidence motion against him but now he also exonerated them which is a blessing that he admitted his ouster by the parliamentarians in a constitutional way. “Imran Khan had been inviting Army to take control of the country through martial law, but they refused,” said the minister.

Bilawal warns President of consequences if summary of Army Chief’s appointment blocked. Minister of Foreign Affairs and Pakistan People’s Party Chairman Bilawal Bhutto warned that the President would face the consequences if he tried to stall the process of the appointment of the new chief of the Pakistan Army.

The Foreign Minister asserted that the constitution of Pakistan has conferred on the prime minister the right to appoint a new army chief. Bilawal Bhutto said that Pakistan Tehreek-e-Insaf (PTI) chairman Imran Khan wants to sabotage the process of the army chief’s appointment, which shall not happen. Imran Khan should let the process of the important appointment complete if he has the motive of democracy, argued Bilawal Bhutto.

Have no issue with whoever is appointed as army chief, says Imran Khan

Speaking to a delegation of journalists at his home in Zaman Park, the former premier said that "I know their [incumbent government] plans, but I am planning ahead." He added that efforts are being made to conduct clean and transparent elections as soon as possible; there is no solution to the country’s problems except for snap polls.

The PTI chief said that messages have been sent to me through President Arif Alvi, adding that talks will take place only after the date given for early elections. "The whole world is aware of their [incumbent rulers] corruption stories. Even after using the entire state machinery against me, they could not find anything except the watch, and I am going to court over the watch issue," He said.