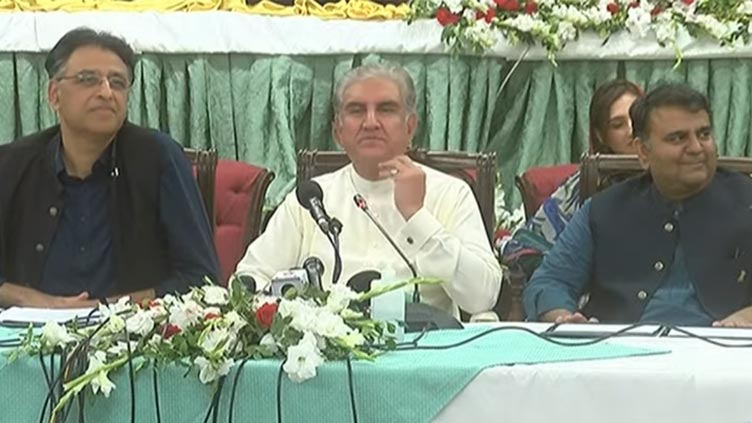 LAHORE (Dunya News) – Former foreign minister and Pakistan Tehreek-e-Insaf (PTI) vice chairman Shah Mahmood Qureshi while reacting to the DG ISI and DG ISPR’s press conference asked what was the need to demarche cypher if it was fabricated and that holding elections will bring stability to the country.

Addressing a press conference flanked by other PTI leaders Asad Umar, Fawad Chaudhry and Shireen Mazaari on Thursday, he said that they [PTI government] was told that it was a sensitive issue and that the ambassador should be demarche over this, following which several sessions, including one of the National Security Committee, was called.

The former foreign minister said that everyone wants institutions not to participate in politics and it will be easier if every institution remains and works within its role.

“The purpose of yesterday’s press conference by one of our colleague was to try to instill fear in people but the statements from London exposed the motives behind the presser,” he said.

Qureshi said that the all the protests of PTI were peaceful but on May 25 the federal government tortured us and we were peaceful, adding that the march will be within the law.

Speaking on the occasion, former federal minister Asad Umar said that PTI chairman Imran Khan has time and again said that a powerful army is important for country’s defence and he never tried to defamed the army in London or Washington.

“The PTI chairman owns the country’s army and it is Imran Khan’s constitutional right criticize, adding that you may not agree with the criticism but the purpose of criticism is the improvement of the army.

Asad Umar went on to say that Imran Khan never talked about weakening the army.

Umar said the Constitution empowers the PTI chief to criticise the military. "But all that criticism, in Khan s view, is directed towards the betterment of the country and the military."

“If you see him as a traitor, then why do you meet him through the back door? […] Don’t do this where you meet quietly at night through the back door and express your unconstitutional wishes but call [the army chief] a traitor in broad daylight. That’s a big contradiction between your words and your actions,” he had said.