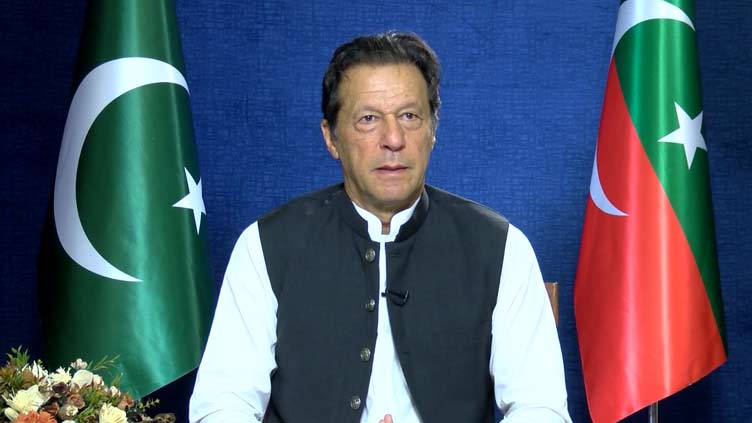 ISLAMABAD (Dunya News) – Former prime minister and Pakistan Tehreek-e-Insaf (PTI) chairman Imran Khan on Monday while raising a question on the appointment of new army chief by those with just 85 seats said that Chief of Army Staff (COAS) General Qamar Javed Bajwa should be given extension until the new government is elected.

In his exclusive interview with Dunya News programme Dunya Kamran Khan Kay Sath, the former PM said that they still have the option of dissolving the provincial assemblies, and they also have a few ideas and will push the federal government staying within the constitution.

He said that on one hand, a message is being conveyed that everyone should work together, while on the other hand, his party is being pushed against the wall. "I can bring the whole nation onto the streets," he said.

The PTI chairman said that the floods have wreaked havoc in the country and the torrential rains caused flooding from the Koh-e-Suleiman. The accumulated flood water in Sindh has ruined the rice crop, which could lead to a food crisis in the future, and the whole nation will have to help the flood affectees.

Imran Khan went on to say that Pakistan needs internal and external aid at this juncture as not a single dam has been constructed in the past 50 years. He further said the construction work on 10 dams was started during his government.

He said, "Climate change is causing destruction all over the world, that s why our government started the Billion Tree Tsunami, adding that the old forests in the country were destroyed and 10 billion trees are very necessary."

Regarding the exchange rate of the dollar, the former PM said that during the PTI government’s tenure, the dollar was at Rs 178 and the growth rate was witnessed at 6 percent, while overseas Pakistanis sent $31 billion in remittances.

The former PM said that he could not imagine that Allah would give him such popularity, adding that he had not seen such enthusiasm during the PTI’s public rallies in big cities. "We are benefiting from every effort of the government, even in Musharraf’s era, I have not seen such cruelty, fascism, people are being intimidated, people are getting calls from anonymous numbers, cable operators were threatened in a telethon," he added. "My popularity is increasing, but I am afraid of economic conditions," Imran said.

While reiterating his call for early elections, the PTI supremo said that the best option is to hold elections in the country to bring political stability, and we have the option to resign from all our governments.

"I can take the nation out on the streets whenever I want, and people come to the streets on my two-hour call, the condition of the common man is bad. It is not a difficult task to evacuate the people, but I decided on peaceful protests because the country is facing a difficult time and we cannot bear more damage," he said.

Imran Khan admitted and stated that accepting the name of the Chief Election Commissioner was a big mistake, adding that the establishment had given a guarantee, but the Chief Election Commissioner left no room against us. "The CEC openly opposed and sabotaged the EVM, and if a transparent election is to be held in the country, voting must be done with a machine," he added.

The former PM further added that intellectuals like Ayaz Amir were humiliated, adding that two TV channels were closed, but if Shehbaz Sharif is not taking responsibility for all these acts, then he should tell the nation who is behind these actions.

"Nations that are developing have a better merit system, and the main reason for China s development is the merit system. I said that Nawaz and Zardari are not qualified to appoint COAS because they are globally recognised corrupt leaders," Imran took a dig at PPP and PML-N bigwigs.

Lashing out at PM Shehbaz Sharif, Imran went on to dub him [Shehbaz] as a "fugitive", questioning how the person with 85 seats can have the power to select the COAS. Reiterating the narrative of a foreign conspiracy, Imran said that the current government came into power through a plot, but if the people in the coalition government came to rule by getting a mandate through the vote, then they [the coalition government] could go for the selection of the COAS. "I am ready to talk with everyone, but first we will talk about the general elections." However, "they [coalition government] get upset when they hear about elections, so how could I talk to them," said the former premier.

"I neither have any property abroad nor intend to run away from this country. These people live in the richest areas of London, but for me, Pakistan is a priority," said the PTI Chairman. He also warned that the country will continue to face the worst situation if this government continues to rule. The PTI Chairman added that he has "no idea how long it will take Pakistan to get back on track if the country has to go bankrupt." Imran claimed that there was no possibility of political stability in the country under the coalition government. Talking about Sindh by-elections, Imran went on to say that the province has been witnessing floods due to which by-elections could be delayed for two months. Sharing his thoughts about the western world, the former premier claimed that no one but him better knew the "psyche" of the western world.

Taking a dig at PM Shehbaz, Imran went on to claim that during Shehbaz Sharif’s conservation with the UN Secretary, he [Shehbaz] had said quite "weird" things. He further lashed out at the PM Shehbaz-led government and said that 60 per cent of Shehbaz’s cabinet are on bail. The Financial Accountability, Transparency, and Integrity (FACTI) panel has conducted research in the world, saying that the elite class, by looting money, sends money to western countries.

Relation with US and EU

Talking about the European Union, the PTI Chairman said that he also had a good relationship with the EU. He said that during his visit to the US as premier, Trump respected him a lot. However, if somebody has money abroad, Americans would not respect that person, the former premier added. The PTI Chairman said that he was a little "upset" with the US, but it doesn’t mean that he is anti-American. It means that his [Imran s] job is to protect the interests of Pakistan.

The PTI Chairman said, "Shahbaz Gill was tortured badly. He [Gil] messaged him and told him that he [Shahbaz Gill] could not bear the torture further. Shahbaz further told me that he [Shahbaz] was being asked to give a statement against me." When I saw the footage of Shahbaz Gill on TV, I said that legal action should be taken against the people who sent him back on remand. Imran questioned that this was an act of terrorism. The PTI Chairman said that he went to jail for the freedom of the judiciary and always respected the courts. Imran said he would give his reply in court as he never imagined he would be involved in contempt of court.

"I am getting the edge from the current situation in the country," the PTI Chairman added. When it comes to the general election, he is not in a rush, Imran added. Reiterating the significance of elections, the PTI Chairman said that elections are the only solution to the problems due to which the country would witness political stability.