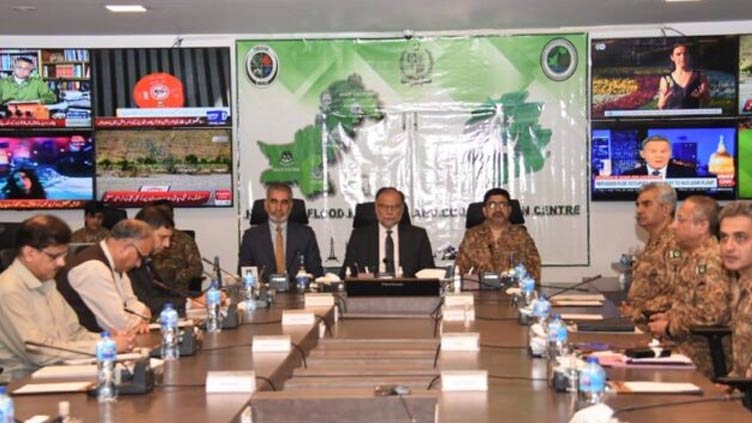 The meeting was held under the chairmanship of Minister for Planning Ahsan Iqbal.

ISLAMABAD (Dunya News) - The first meeting of the National Flood Response and Coordination Center (NFRCC) was held on Saturday to review flood situation in the country.

The meeting, which was held under the chairmanship of Minister for Planning Ahsan Iqbal, was briefed about the ongoing disaster mitigation and relief efforts throughout the country.

Addressing the media persons after the meeting, Ahsan Iqbal said that the country was facing the worst climate-induced damage in recent world history with over 33 million people affected by the floods.

The minister said that the magnitude of the loss is huge but our commitment is also big and maintained that it was impossible to face the calamity alone.

He stated 1,500 mm of rain fell in some areas, compared to the 20-30 mm average of previous years and that the regions of South Punjab, Dir, Nowshera and Charsadda were badly affected.

“More than one million houses were damaged, about 5,000 kilometers of roads were ruined and a fortnight ago, 14 major highways connecting the country’s main logistics hubs were cut off.”

Ahsan said that the Pakistani armed forces and other agencies jointly repaired some of the highways while the remaining ones would also be restored in the coming days.

He further said recovery efforts in Punjab were rapidly undertaken, adding that Dera Ghazi Khan was badly affected by inundation which left 54 dead.

So far, 69 of the 81 submerged grid stations have been restored, and 758 of the 881 feeders damaged were repaired while work was ongoing on the remaining 123, he said.

“2,900 of the 3,500 mobile phone towers affected have been restored,” said the planning minister, adding that the prime minister had issued directions to fix the remaining 600 towers soon.

Meanwhile, Director-General Inter-Services Public Relations (ISPR) Babar Iftikhar, while briefing the media on rescue and relief efforts by the armed forces said that Corps commander conferences held in July and August reaffirmed commitment to provide all possible help to flood affectees and Chief of Army Staff General Qamar Javed Bajwa gave special directions in this regard.

“The army chief visited flood-affected areas and monitored the rescue operations,” the spokesperson said, adding that the army officials rescued people despite bad weather and other challenges.

“Army set up 147 relief camps across the country [to facilitate the flood victims],” Babar Iftikhar added. He maintained that 50,000 people were given relief in the camps.

Urging people and philanthropists to donate to the flood victims, the army spokesperson said that 284 flood relief collection points have been established across the country.

On the other hand, Chairman National Disaster Management Authority (NDMA) Lieutenant General Akhtar Nawaz said that monsoon rains began almost three weeks before their expected schedule and they were "unprecedented".

The NDMA chairman said that heavy rainfall was expected, but the downpour was exponentially above the forecast, resulting in extreme flooding across the country.

The rains — which were to occur in Khyber Pakhtunkhwa, Azad Kashmir, and northern areas — shifted from their traditional routes and occurred in Balochistan s eastern areas, Southern KP, Punjab s DG Khan and Rajanpur, and across Sindh.

"The rains were extremely heavy in Sindh, which led to an unprecedented situation," he said.