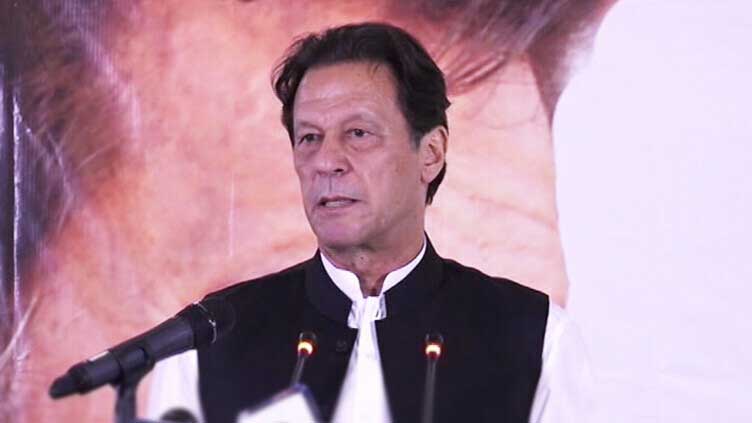 ISLAMABAD (Dunya News) – Former prime minister and Pakistan Tehreek-e-Insaf (PTI) chairman Imran Khan on Thursday urged the ‘neutrals’ to review their policies and said that sometimes the decisions taken behind the doors don’t turn out to be right.

Addressing an event in Islamabad on Thursday, he said that he wanted to ask the neutrals if they know where the country is heading.

Speaking about the corruption, Imran Khan said the PPP and PML-N in 1990 were thrown out due to corruption, adding that both the parties made corruption cases against each other and former prime minister Nawaz Sharif and Benazir Bhutto sent millions of rupees abroad in 1996.

“Nawaz Sharif built 17 factories during his tenures as the prime minister the country,” he said and added his party supported former President Pervez Musharraf thinking that he would root out corruption from the country but he gave them NRO.

The former PM went on to say that he thought that the establishment would react seeing their [PPP and PML-N] corruption, adding that even the ISI told him about corruption.

Regarding NAB, the PTI chairman said unfortunately, the anti-graft watchdog was not in their control and later he came to know that they [NAB] had support.

“I would have recovered $15 billion from the plunderers if NAB had been in my hand and put them in jails.”

Imran Khan alleged that attempts were being made to disqualify him and break his party, saying that the country was in a phase where people were being psychologically pressured into accepting the new setup.

“They are using every tactic for it,” he pressed. “The way people are being picked up from social media and they are being forced to say that Imran Khan forced them to say things against the army.”

Imran said that journalists such as Sami Ibrahim, Sabir Shakir and Arshad Sharif were being threatened.

The PTI chairman further condemned the “torture” of his chief of staff Shahbaz Gill. “They have completely broken him down and I believe our society has fallen to a point where I am ashamed. And they are doing all this only so that we accept these thieves.”

The former PM added that plans were being made to break the PTI. “They are calling our people, MNAs and are spreading fear amongst them,” he claimed.

Imran then challenged that spreading fear amongst the people would not help because the nation had finally realised that they wanted true freedom.