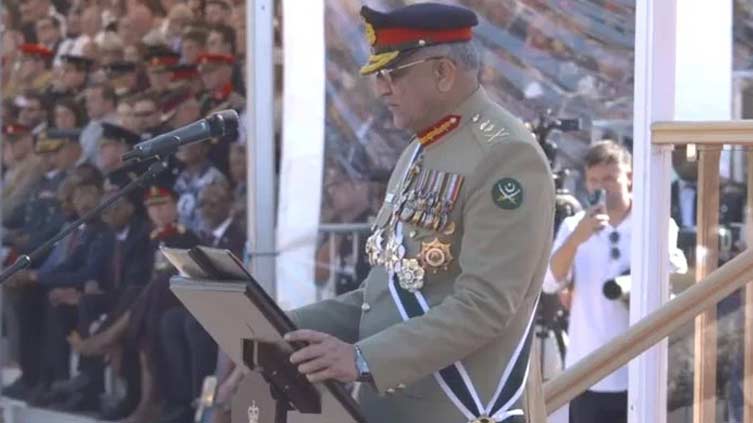 LONDON (Dunya News) - Chief of Army Staff General Qamar Javed Bajwa addressed a passing out parade at the British Royal Military Academy, Sandhurst as the first Pakistani dignitary who was invited as the chief guest.

Addressing the parade at Royal Military Academy Sandhurst, COAS Bajwa greeted to all the audience and viewers and said that the relations between Pakistan and Great Britain are based on friendship and mutual cooperation.

General Bajwa congratulated the Royal Academy cadets on passing the training course. He said that to face the challenges of today youth should take advantage of the technology.

"Your alma matter is, without a doubt, one of the finest military institutions in the world which have produced some of the great military leaders that this world has ever seen," he said, adding that graduating from Sandhurst is a great honour and pride.

Apart from UK local cadets, 41 international cadets from 26 other countries including two cadets from Pakistan namely Muhammad Abdullah Babar and Mujtaba — have passed out.

It is worth mentioning here that Army Chief Qamar Javed Bajwa has become the first Pakistani ever to be the representative of the Queen during the sovereign’s parade at the Military Academy Sandhurst.

According to the UK’s Defence Ministry, General Bajwa represented the Queen at the sovereign’s parade for commissioning course 213 (CC213) of the Royal Military Academy Sandhurst (RMAS) on Friday during a ceremony that attracted military leaders from dozens of countries of the world.

This was the 198th sovereign’s parade where General Bajwa became the first Pakistani to be the sovereign’s representative.