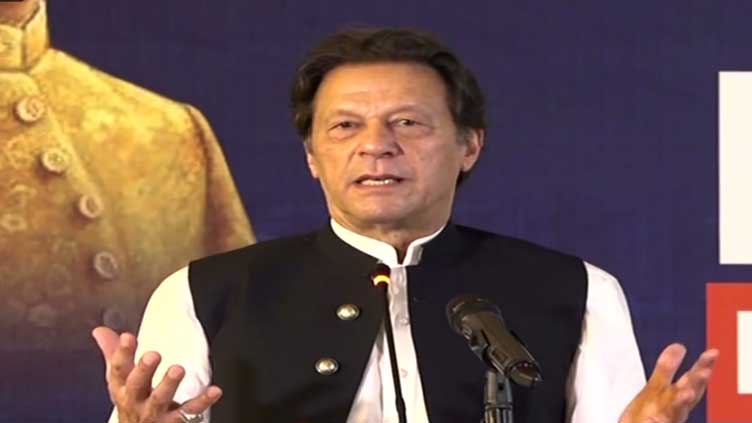 Giving policy statement on the constitutional crisis in Punjab, he said, "I want to congratulate nation because we all knew that the election of the Chief Minister of Punjab was unconstitutional and Hamza Sharif had no right to be the chief executive of the province for so long."

Commenting on the verdict pronounced by Lahore High Court (LHC) regarding the election of Punjab Chief Minister slot, Imran Khan said that there is no clarification in this decision and also expressed fear of constitutional crisis to deepen if the clarification does not come and under which law Hamza Shahbaz can remain CM.

The PTI chairman appealed the apex court issue stay order on tomorrow’s election, adding that our six members are in Saudi Arabia for Hajj pilgrimage.

The former PM also raised question on the fairness of elections under Hamza Shahbaz and said that the LHC verdict proved that Hamza Shahbaz was an unconstitutional CM.

Khan accused the Punjab government of interfering in by-elections of 20 constituencies and two of the PTI candidates told him about receiving phone calls to not to contest election on PTI ticket.

On the other hand, he said, the allies of the coalition government were raising fingers on the government over local body elections in Sindh, adding that the police was used in the LG elections.

Imran Khan said that no one trust the Election Commission of Pakistan (ECP), adding that whoever is imposing this set up, is damaging the institutions and free and fair elections should be held in the country, whereas, Sindh and Punjab like election will only increase chaos.

The former PM said that the media was pressurized after regime change, whereas independence was a major reason for which Pakistan came into being and the whole struggle of Quaid-e-Azam Muhammad Ali Jinnah was to get freedom.