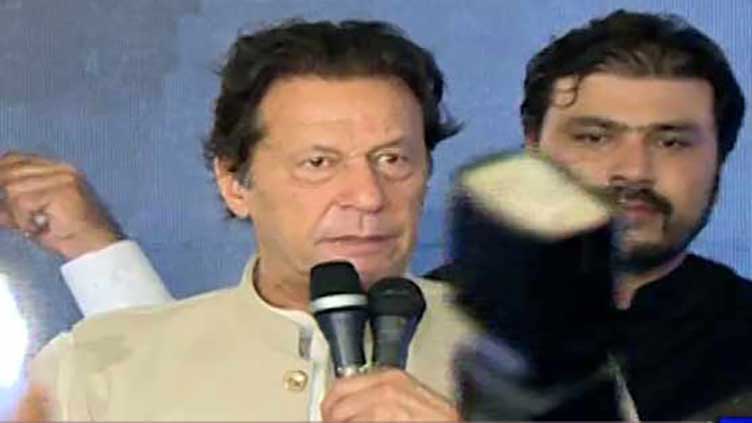 LAHORE (Dunya News) – Pakistan Tehreek-e-Insaf (PTI) Chairman and former Prime Minister Imran Khan on Sunday said that the incumbent government is illegitimate and the Election Commission is also biased, therefore no one has trust in them.

Addressing the workers conventions amid his visit to Lahore pertaining to the Punjab by-polls campaign, Imran Khan said that they have to reach out to people in order to prepare them. It is not just the election of one constituency but of Pakistan.

“Under no circumstances will the turncoats succeed in their constituencies,” he said.

In his speech the former PM told the IG Punjab to abide by the law. People will not forgive you if you do not follow the law, he added.

Rebuking the incumbent government he said the people have turned against these thieves.

Earlier speaking to another workers convention in Lahore, the former Prime Minister said that the turncoats should be defeated in the by-elections, as they insult people by compromising their morals.

Imran Khan urged people to not let the turncoats succeed and explained that it’s an insult to public, as the turncoats’ compromise over their principles and moral standards.

“We will defeat the turncoats so that they will not come to the House again,” he added.

Imran Khan while holding the Punjab Chief Minister Hamza Shahbaz and Prime Minister Shehbaz Sharif responsible for the torture on PTI workers during the PTI Azadi March said people are being intimidated by the police. Hamza and his father have to be defeated, he added.

There was also some mismanagement in the PP-168 convention on the arrival of Imran Khan. The door of the hall was broken due to rush of workers and glass of the door was also broken. Even at the time of Chairman PTI’s departure, there was a rush of supporters.