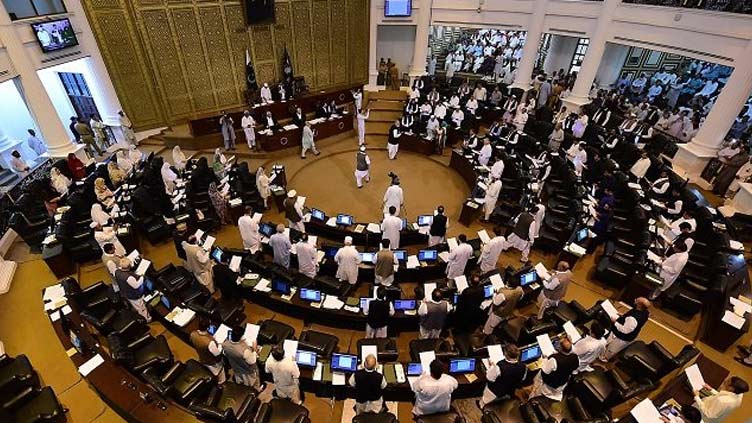 Speaking on the occasion, Chief Minister Mahmood Khan congratulated the finance minister and his team over the passage of finance bill and said the provincial government presented a balanced budget in the history of the province.

Referring to the MMA and ANP governments in the province, he alleged that in the past the road projects remained delayed. The two major political parties while in government had taken loans from the International Monetary Fund 20 times.

He said former prime minister Imran Khan was ousted from government for pursuing an independent foreign policy and hinting at not taking loans from the IMF and the country had to face economic crisis.

The CM urged the federal and provincial governments not to impose ban on transportation of wheat to the KP province.

Commenting on the budget, he said 33 percent of the development budget was being given to the people. Some Rs 200 billion would be directly spent on public welfare initiatives, including Insaf Health Card, Insaf Food Card, Kisan Card, Wheat Subsidy, stipend for Ulema, Education Card, free IT trainings for youth, free medicines, soft loans and free education for schoolchildren.

He said the provincial government succeeded to increase the annual revenue from RS 30 billion to Rs 75 billion, besides creating 1.8 million jobs and increasing the literacy rate by 55 percent from 52 percent.

He said FATA’s merger was a big challenge and the PTI government successfully accomplished it, and now the tribal districts had representation in the assembly.

He said for the first time local government elections were held in the tribal districts and the KP government also approved laws in that regard, besides allocating Rs 130 billion budget for them.

He said 45,000 teachers were recruited in the province. Some 38 colleges would be made operational in the merged districts while universities would be established in Shangal, Dir, Hangu and Bajaur. He said 313 mw Balakot power project would be inaugurated soon while work on other power projects in Kalam, Madain, Bhatta, Kundi and Batlatan was underway.

The CM said work on Swat Express Phase-II would begin soon while the the tender for Dir Expressway had been opened and work on it would start within three months. He said the government was negotiating loans for the construction of Dera-Peshawar Motorway, which would connect the whole province with the CPEC project.

He said the CRBC Lift Canal project had been cleared by the Communication and Works Department. It would be initiated with Rs 240 billion, and on completion would bring 400,000 acres of land under cultivation.

He said the Peshawar New Valley project would be launched soon, and land procurement for it was under process on land sharing basis. He said Rs 418 billion had been allocated for development budget, adding some 63,000 employees would be regularized in the province and the per month minimum wage increased to Rs 26,000.