Will DG ISPR decide if conspiracy was hatched or not, asks Imran Khan 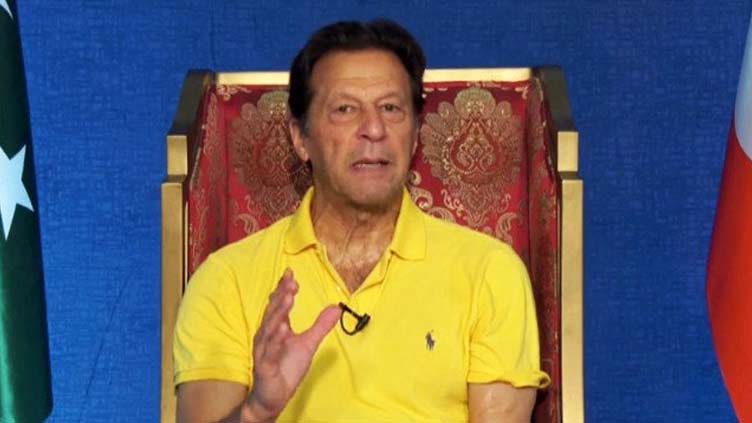 Will DG ISPR decide if conspiracy was hatched or not, asks Imran Khan

Imran Khan said that the Supreme Court should constitute a judicial commission and conduct investigation.

“We asked to hold an open hearing to find out if there was any interference and the conspiracy has awaken our nation,” he said and added the toppling of PTI government was celebrated in India and Israel. People should come out and fight for their rights like a living nation, he said.

The PTI Chairman said that Shehbaz Sharif supported our position that there has been interference, adding that no one can deny the facts on cipher messages. “We have record and our people visited US consulate adding that our allies suddenly began to leave together and a no-confidence motion was submitted on March 8.”

The former PM said, “This threat was meant to remove me and our ambassador sent a cipher which reached me directly, while Donald Lu threatened that the outcome would not be good if Imran Khan was not removed.

Taking a dig at the Election Commission of Pakistan (ECP), Imran Khan said that the commission wanted to re-elect Hamza Shehbaz as the Punjab chief minister.

He further alleged that the commission was not filling the vacant reserved seats and were waiting for the Punjab by-elections so that they could carry out “rigging”.

“We know very well that ECP officials are meeting and dealing with Hamza and Maryam for this purpose,” and added that he deemed the development a humiliation for the parliamentary system of governance.

On the other hand, addressing a ceremony in Rawalpindi, the PTI chairperson said that if the country continues with the current economic policies then the country is on the path of Sri Lanka-like situation.

The PTI chairman said today exports have fallen by 10% while Rs700 billion has gone out of the stock exchange and Moody’s has also downgraded Pakistan’s rating, adding that if the country continues like this then the country is on the path of Sri Lanka-like situation. The early and transparent elections only way to save the country.

Rebuking the current government, he said rulers want the ECP aid in the upcoming by-elections in 20 constituencies of Punjab, adding that there can be no clean and transparent elections through the present Election Commission.

He said “you should be fully prepared when I give call for the long march”, adding that during PTI’s long march, people were shelled like criminals, terrorists, police and we saw such brutal scenes like occupied Kashmir in Islamabad.

"Allah does not allow being a neutral. You have to decide to stand with the righteous or with the other side,” Imran Khan said.

Earlier, the former PM said that Pakistan’s most populous province is in the complete political chaos.

In his statement on Twitter, while lashing out at Prime Minister Shehbaz Sharif and Punjab Chief Minister Hamza Shahbaz, Imran Khan wrote that “Ever since Hamza Shahabaz came to power illegally through a fake election in Punjab, Pakistan’s most populous province is in the throes of political turmoil.”

The former PM said that people are suffering, farmers’ crops are in jeopardy but everywhere Mafia is challenging the government’s writ and the rulers are unable to control them.

Turing his aim at the Punjab police, he said that the police and the local administration are facilitating the mafia, adding that they tortured the peaceful PTI workers, leaders and their families during the long march. “Now they [PM Shehbaz, CM Hamza] think that they are not accountable before the people but we cannot allow this chaos and criminal rule to prevail,” Imran Khan added.