Court extends bail of PM Shehbaz, CM Hamza till May 28 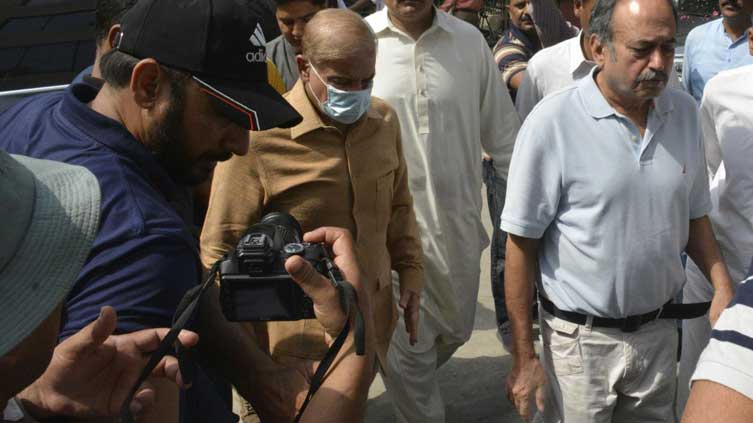 Court extends bail of PM Shehbaz, CM Hamza till May 28

The father-son duo pleaded for the pre-arrest bail in the the money laundering case.

While speaking on rostrum, PM Shehbaz said, "It is my right to inform the court about facts regarding my bail. No case of corruption has been proved against me. Several cases have been made against and have been appeared before court several times because of them."

The prime minister said that FIA and NAB filed the same case against him. PM Shehbaz said he was booked in Ashiana Housing and Ramzan Sugar Mills cases.

At this, the judge asked, “Did you not have any share in them?”

Giving details about the cases registered against him, PM Shehbaz said charges of abuse of powers were levelled against him in the Ashiana Housing case. He maintained that the LHC had given its ruling in the case. Later, the NAB moved the apex court against him. The NAB fled when the Supreme Court sought proof of corruption against him from the NAB.

“When I was in NAB’s custody, FIA officials visited me twice,” he said, adding that he verbally provided all the details to them.

The prime minister said that cases against him were decided on merit and he was released. “Why FIA is not reprimanded for not submitting challan?” asked the prime minister.

PM Shehbaz said that it seems that FIA was using delaying tactics to arrest him.

He said that the cases against him are false and baseless. "I have told FIA that i will not submit any answer verbally and will answer after consulting my lawyers."

In December 2021, the FIA had submitted the challan against Shehbaz and Hamza before the special court for their alleged involvement in laundering an amount of Rs16 billion in the sugar scam case.

Later in the day, court extended the interim bail of PM Shehbaz and his son CM Hamza until May 28 in the Rs16 billion money laundering case.

Judge Ijaz Hassan Awan adjourned the hearing till May 28.