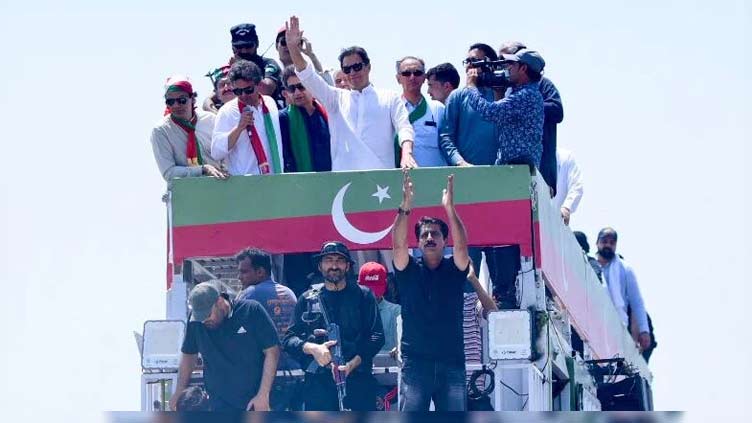 ISLAMABAD (Dunya News) – Hours after Pakistan Tehreek-e-Insaf (PTI) begun what it termed as “Haqiqi Azadi March” demanding the dissolution of the National Assembly and a date for the next general election, the government and the PTI held dialogues in an effort to end impasse.

During the talks, the government expressed its willingness to remove containers if former PM and PTI chairman returns home after holding a rally in Islamabad instead of sit-in, while the representatives of the PTI insisted on staging a sit-in in the federal capital until their demands are met.

It may be recalled that the PTI had sought permission to hold a sit-in in Islamabad but the government had refused due to fears of disturbing the peace. The PTI was also directed to record their protest and return home.

According to the details obtained by Dunya News regarding the dialogues, the PTI contacted the government two days ago and proposed the government election time frame within 8 to 10 months.

Fawad Chaudhry and Asad Qaiser had contacted PML-N’s Ayaz Sadiq on behalf of PTI to which Sadiq said that the proposal would be laid before party supremo Nawaz Sharif.

Following the talks, the government again rejected the PTI’s proposal.

Before announcing the date for the march, the PTI chairman explained his allegations of conspiracy as well as the purpose of his march. "The march would have two primary demands: dissolution of assemblies and a date for elections," Imran Khan said.

Khan demanded a free and fair election in the country and said that he would accept it if the nation would bring the current government back into power. However, no country from outside will be allowed to impose them on us, he said. Imran said that the  long march  would convert into a sit-in and continue until his demands are accepted.

Federal Interior Minister Rana Sanaullah while rejecting reports of talks with Pakistan Tehreek-e-Insaf (PTI) said that there were no talks with the government and no agreement, baseless news is being spread in this regard. A four-member committee has been formed on the direction of the Supreme Court but he is not a part of that team.

In a press conference with Marriyum Aurangzeb in Islamabad, Rana Sanaullah said that 200 to 250 people had returned from Ravi Bridge. While he explained that PTI had spread the news of the arrests and In the rest of the Punjab, about 40 people were spotted at some place and even they turned away.

“I am thankful to the people of Punjab for not being a part of the ‘fitna fasad’ ”, he added.

Criticizing the PTI Chairman, he exclaimed that Imran Khan wants to mislead and divide the younger generation. Young people should never be part of his agenda.

The Interior Minister further said that People of Balochistan do not even know about the PTI long march, adding that the situation in Sindh is peaceful. The people of Sindh also refused to be a part of the riots.

The PML-N-led federal and Punjab governments closed roads leading to Islamabad from various Punjab cities and Khyber Pakhtunkhwa (KP) province in an effort to stop PTI activists from marching on Islamabad.

The government has cut road links between KP and Punjab as police parties continue to raid the homes of PTI activists. The authorities have also imposed Section 144 in Sindh, Punjab, and Islamabad Capital Territory, banning the assembly of more than four people.

Later the government after taking a decision to stop the long march launched a crackdown against the members of PTI throughout the country in a bid to stop them from marching towards the capital Islamabad.

Police authorities raided houses of senior members of the PTI in the major cities of Pakistan and have already taken into custody hundreds of supporters of PTI, who were gearing up to join Imran Khan s long march towards Islamabad.

In raids across the country, especially in the Punjab province, the police arrested PTI supporters, while forcing senior members of the party to go into hiding.

Police have seized a huge cache of weapons from residence of PTI leader in provincial capital of Punjab.

DIG Operations while addressing a press conference, said that police had reports that cache of weapons was being shifted to Lahore.

Supreme Court of Pakistan directs government to provide suitable spot to Pakistan Tehreek-e-Insaf (PTI) for its long march. Supreme Court was hearing a petition against the closure of roads and highways and arrests of political workers ahead of the long march.

During the hearing, Justice Ijaz ul Ahsan remarked that PTI should lodge its protest and go back while government should devise a traffic plan for long march venue. We would also seek assurances from the PTI, he added.

The court further remarked that it hopes government will reopen roads and lift blockages. "If the PTI fears arrests, it should provide us with a list. We will protect those who fear arrests." Justice Ahsan said political parties had their own interests but they were secondary to the country and the people.