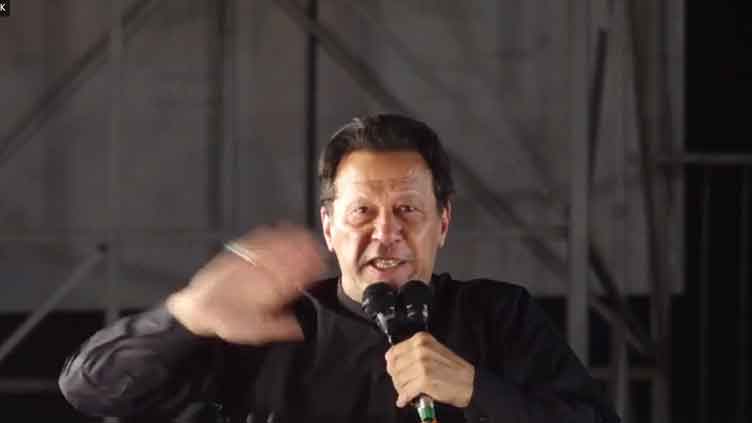 GUJRANWALA (Dunya News) - Pakistan Tehreek-e-Insaf Chairman Imran Khan on Wednesday criticizing the Prime Minister said that we will put Shehbaz Shairf in Jail as he steps down from power.

Addressing a rally in Gujranwala, Imran Khan reminded PML-N led government of PTI’s huge public support saying that time is up for them, as their government will be drowned by sea of People.

He further mentioned that Pakistan Peoples Party (PPP) chairman is dominating the politics of PML-N.

PML-N is facing criticism while Asif Ali Zardari is enjoying, he added.

The PTI Chairman expressed much opitimism for their victory against the incumbent government. He stated that there is no doubt that this month we will win our real war of independence in Islamabad.

Will give call for long march on Friday: Imran Khan

Earlier, addressing the Lawyers Convention in Lahore, Imran Khan said that Pakistan will not accept the US slavery and he will give the call for Islamabad long march on Friday. The history of Pakistan is that unless lawyers are involved, the movement will not be successful and Lawyers have to work together in the real freedom movement.

PTI chairman while lashing out at PM Sharif said that there are 40 billion ruppes money laundering cases against Shehbaz Sharif, his sons and this cannot happen in any civilized society of the world that a PM vanishes his cases and get NRO. Lawyers should go to the Supreme Court, High Court against thieves, he added.

The former prime minister further added that prosperity can never come in a country where there is no rule of law and PTI’s movement will bury these thieves forever, he said.