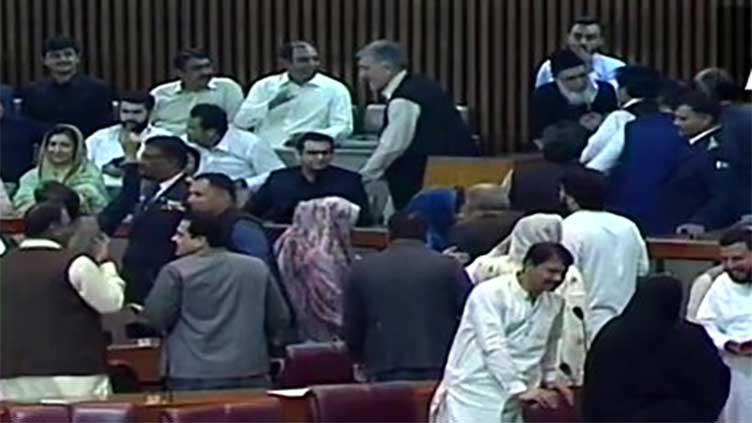 The NA session has been held for the election of the new prime minister.

ISLAMABAD (Dunya News) – Pakistan Tehreek-e-Insaf MNAs staged walk out and announced resignations from the National Assembly before the commencement of voting for the election of the new prime minister.

The development came after a PTI Parliamentary Committee meeting chaired by Imran Khan decided that all the lawmakers belonging to the party will step down from the National Assembly seats.

The NA session for the election of the prime minister today began with the recitation of the Holy Quran.

After the recitation, Deputy Speaker Qasim Suri gave explanation regarding his ruling to dismiss the no-confidence motion against erstwhile prime minister Imran Khan on April 3.

"The ruling was declared unconstitutional by the court and we all are obliged to respect the court. But I want to tell you the reason behind my ruling," he said.

Qasim Suri said he had taken the decision as a responsible Pakistani and deputy speaker of the NA.

He then referred to the foreign letter, which allegedly contained evidence of a foreign intervention to oust Imran Khan’s government, saying the matter was discussed in the federal cabinet, the National Security Committee meeting and the parliamentary committee for security meeting.

The Deputy Speaker then held up a piece of paper, saying that he had the cable with him. In the letter, he continued, an "open threat" had been made to Pakistan.

The deputy speaker announced that he was sealing the cable and sending it to Chief Justice of Pakistan Umar Ata Bandial.

Taking the floor, Vice Chairman of Pakistan Tehreek-e-Insaf (PTI) Shah Mahmood Qureshi announced to boycott the election to the leader of the house. He said the decision to this effect was taken in a party meeting chaired by Chairman Imran Khan. On behalf of the PTI members, he also announced resignations from the National Assembly.

Later, the PTI members walked out of the house.