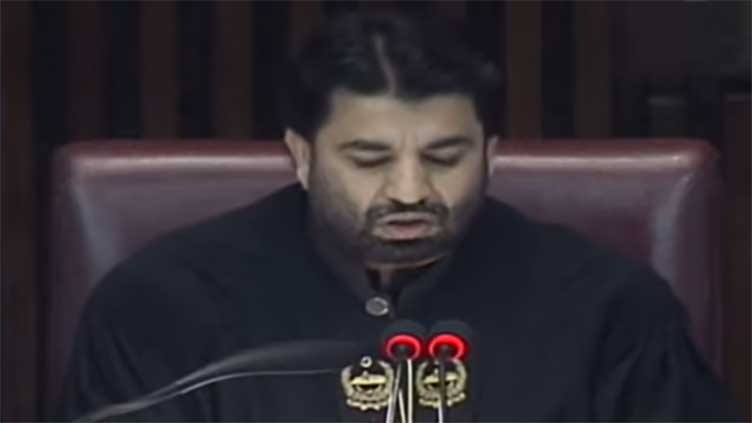 NA Deputy Speaker made the announcement during crucial session on Sunday.

ISLAMABAD (Web Desk) – Opposition’s hopes of ousting the premier were dashed after Deputy Speaker of the National Assembly Qasim Suri rejected no-confidence motion against Prime Minister Imran Khan, terming it against Article 5 of the Constitution.

Earlier, the opposition lawmakers appeared confident of the success of the no-confidence motion as they entered the Parliament House. The opposition needed the support of at least 172 lawmakers from a total of 342 to oust the prime minister through the no-trust vote.

It merits mention that no premier has ever completed a full term, and Khan faces the biggest challenge to his rule since being elected in 2018, with opponents accusing him of economic mismanagement and bungling foreign policy.

PM Imran’s Pakistan Tehreek-e-Insaf party (PTI) effectively lost its majority in the 342-member assembly last week when a coalition partner said its seven lawmakers would vote with the opposition.

More than a dozen PTI lawmakers have also indicated they will cross the floor. The opposition needs 172 votes for the motion to succeed.

The opposition is headed by the Pakistan Muslim League-N (PML-N) and the Pakistan Peoples Party (PPP) -- two groups that dominated national politics for decades until Khan forged a coalition against them.

If Khan goes, the PML-N’s Shehbaz Sharif is tipped to become the next prime minister.

Sharif is the younger brother of three-time prime minister Nawaz Sharif, who was ousted in 2017 and jailed on corruption charges, but is currently in Britain after being released from prison for medical treatment.

On Saturday the government moved to have Shehbaz sent back to jail to await trial on money-laundering charges that have been pending since 2020, asking a Lahore court to revoke his bail. A decision is expected Monday.

Khan was elected after promising to sweep away decades of entrenched corruption and cronyism, but has struggled to maintain support with inflation skyrocketing, a feeble rupee and crippling debt.

Debate on the no-confidence motion was due to start Thursday, but the deputy speaker -- from Khan’s party -- suspended proceedings when legislators declined to first address other items on the agenda.

Khan, a former international cricket star who in 1992 captained Pakistan to their only World Cup win, hinted Saturday he still had a card to play.