Will give huge surprise on Sunday, says PM Imran 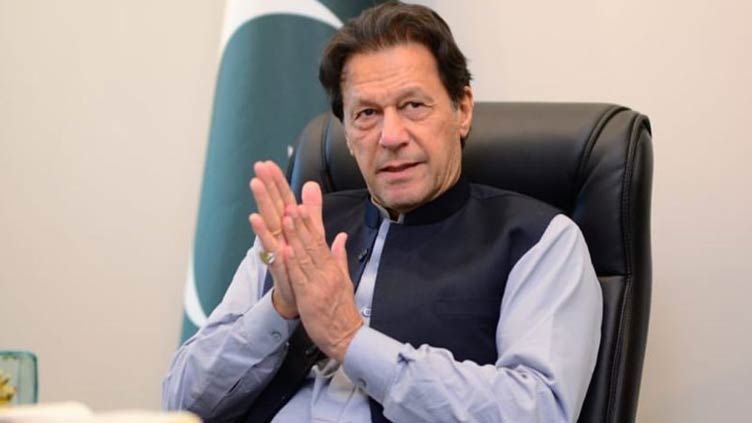 Will give huge surprise on Sunday, says PM Imran

ISLAMABAD (Dunya News) – Prime Minister Imran Khan said on Friday that they will give huge surprise on Sunday on the day of voting for no-confidence motion submitted by the joint opposition.

He said this in his meeting with senior journalists.

During the meeting, the prime minister said that removing Sardar Usman Buzdar from his post was a political ploy, adding that the opposition would be greatly surprised on the issue of counting on Sunday.

He said that the legal process is being used, adding that he will fight till the last ball.

In an interview to a private TV channel on Friday, he said that the history of the subcontinent is that it has always been controlled from outside, while Mir Jaffer and Mir Sadiq work from are inside.

He said Mohammad Mosaddegh introduced an independent foreign policy in Iran and he was removed through coup, adding that the outside world needs slaves who bring domestic policy for personal interests.

Imran Khan said he had an idea of conspiracy from August, adding that he knew the planning when people used to go to London. Former PM and PML-N supremo Nawaz Sharif met Hussain Haqqani in London on March 3.

He went on to say that Hussain Haqqani was also against the Pakistani army but if we do not have a strong army, the enemy will divide our country into 3 parts. “Iraq, Syria, Libya have been weakened due to lack of strong army and Pakistan needs a strong army,” he said adding that nothing should be done to harm the strong army.

Asif Zardari, Nawaz Sharif harmed the country the most, PM Khan said and added Maryam Nawaz openly criticized the army. I will never speak against the army.

Referring to the conspiracy for his ouster, the prime minister said the developing countries were controlled by the abettors calling them Mir Jafar and Mir Sadiq of the present day.

In such a case, the foreign powers did not need to conquer a country rather they achieve their objective by planting the people who compromise the national interest.

The prime minister said he had been in the know of the conspiracy since August and had also warned his cabinet of a tough winter ahead.

To a question, he said Nawaz Sharif had been meeting people like Hussain Haqqani who had asked the US to protect Asif Zardari against the Pakistan Army. Haqqani also met Nawaz Sharif on March 3, four days before the government received the communication calling for his ouster.

The prime minister said a strong army was inevitable for the country and exemplified Iraq, Syria, Somalia and Libya were destroyed by the foreign forces as they lacked a strong army. Even Pakistan would also have been disintegrated into three pieces if we did not have a strong army.

Imran Khan said no individual inflicted the loss to the country more than Nawaz Sharif as he was the mastermind of Yellow Journalism, Changa Manga politics and even buying the judges.

He said both Nawaz Sharif and Asif Zardari made corruption an acceptable evil in society as no civilized society could imagine the trade of loyalties as had been done at Sindh House.

He said that after getting the first NRO from Pervez Musharraf, the opposition was yearning for the second NRO to regain power and abolish National Accountability Bureau to do away with their corruption cases and pave way for revoking the disqualification of Nawaz Sharif. “They are trying to reinstate themselves by destroying the institutions,” he remarked.

The prime minister said the foreign powers were using the “thieves” to control the country who could not speak up to conceal their riches abroad. He said the corrupt leaders insulted Pakistan and put Pakistan’s Ideology on the backburner as they compromised the foreign policy just for sake of aid to become billionaires. He said people of tribal areas as well as the expatriates suffered a lot after Pakistan joined the US-led war against terrorism just for sake of aid and appeasing the superpower.

Reiterating his government’s policy of having cordial relations with all the states, he said Pakistan would become a partner in peace but not conflict. He said that after losing 80,000 lives, Pakistan achieved nothing from the US-led anti-terror war except the elite which got benefits.

He said that contrary to the practice of joining one bloc after the other, his government’s foreign policy was aimed at keeping people’s interests supreme. He said Nawaz Sharif and Maulana Fazlur Rehman’s party had supported the conspiracy against Zulfiqar Ali Bhutto who was also targeted for towing an independent foreign policy.

Earlier today while addressing Islamabad Security Dialogue, Imran Khan terming an independent foreign policy crucial for the country, said the reason why Pakistan could not touch its peak potential was its ‘dependency syndrome’ on other powerful nations.

“A county without an independent foreign policy remains unable to secure the interests of its people,” he said.

PM Imran said taking independent decision while keeping high the interests of nation was extremely important rather than submitting to the will of other countries in exchange of foreign aid.

He also said a nation could not progress until it kept thinking that it could not survive without foreign aid and criticized the decisions of previous governments for joining the alien wars, namely the Afghan war and the post 9/11 war on terror.

“These decisions, that incurred major damage to Pakistan, were made for the sake of dollars,” he said.

He pointed out that such detrimental policies resulted in sectarian militancy that disrupted the environment of investment, and promoted drug rackets and black money in the country.

Khan also regretted that no independent evaluation was made afterwards to assess the damage suffered by the Pakistani society, and said “the elite filled up their bank accounts at the cost of the nation”.

The PM said his government during four years pursued an independent foreign policy that helped the country gain respect in global arena.

Referring to the US, he said a “powerful country” had expressed displeasure over his recent visit to Russia. “On the other hand, it is supporting its ally India which imports oil from Russia”.

“How come a country can interfere into the affairs of an independent State,” he said. “But not to blame them, as it is our fault because we gave them this impression”.

He said for its own interest, Pakistan’s elite threw the nation to altar and put its self-respect at stake.

Imran Khan said national security was a multidimensional phenomenon and could be ensured when the State and nation got united at single vision and ideology.

He said his government firmly believed that there was a symbiotic relationship between economic, human, and traditional security which was imperative for Pakistan’s long-term development.

He said domestic stability and regional peace based on mutual co-existence, regional connectivity, and shared prosperity were essential prerequisites to optimising national security.