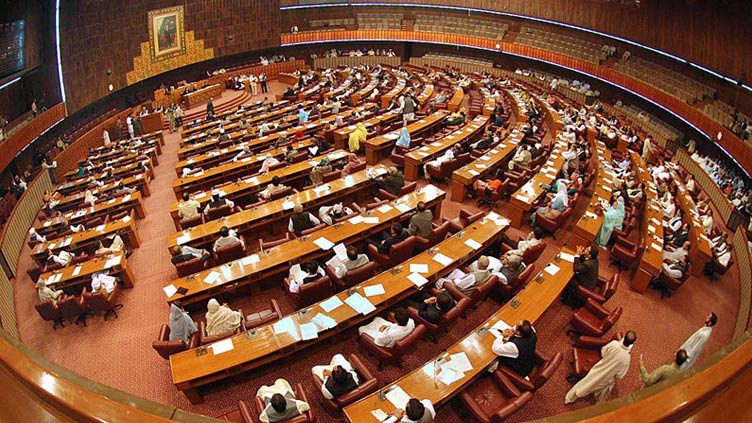 At the start of the session today, members from the opposition, including Shazia Marri, Marriyum Aurangzeb and others demanded quick voting on no-confidence motion against Prime Minister Imran Khan.

The Deputy Speaker, who presided over the session, adjourned the session till 11am on Sunday.

Earlier, the joint opposition had submitted a petition to the NA Secretariat by Sardar Ayaz Sadiq, Naveed Qamar, and Shazia Marri on behalf of the Leader of the Opposition in the National Assembly Shehbaz Sharif to include the election of a new Prime Minister in the agenda of the National Assembly.

The petition demanded that the election of a new Prime Minister be included in the agenda by issuing a supplementary agenda.

On this occasion, the PMLN leader Sardar Ayaz Sadiq said, "We request that the election of a new Prime Minister be included in the agenda by issuing a supplementary agenda."

In the event of the success of no-confidence motion, the election of a new Prime Minister should be on the agenda, he added.

The opposition had also submitted a requisition to summon the National Assembly session in which the no-trust motion will be tabled.

PPP leader Naveed Qamar said the motion, which calls for the requisition of a National Assembly session, had signatures of more than 100 lawmakers. According to NA rules, in order for a session to be requisitioned to vote on a no-confidence motion, signatures from at least 68 MNAs are required.

In order to make the no-confidence motion against the prime minister successful, the joint opposition requires the support of 172 MNAs. After the filing of the motion, the NA speaker has between three to seven days to summon a session of the NA to conduct voting.

The 342-member National Assembly must have 172 votes for the no-confidence motion to ensure PM Imran Khan’s removal.

The joint opposition had also claimed that they have the support of 28 members of the PTI and others from coalition partners of the government.