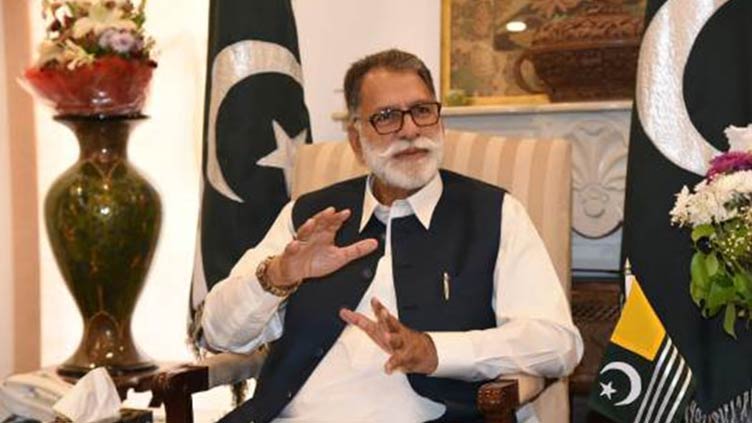 ISLAMABAD (Dunya News) – Terming Imran Khan as a great asset of the Muslim world, the Prime Minister Azad Jammu and Kashmir (AJK) Sardar Abdul Qayyum Niazi has said that the people of Pakistan and Kashmir were proud of their leader whose tireless campaign led to UNGA s approval to a resolution by setting March 15 as international day to combat Islamophobia.

"By getting this landmark resolution adopted by Prime Minister Imran Khan has fulfilled his obligations as a true lover of the Prophet (SAW)", the AJK PM said while addressing a massive public rally at Parade Ground in Islamabad on Sunday.

Speaking on the occasion, he said that the people of Pakistan, Kashmir and all across the Muslim world were proud of him (IK). "Sea of people present at Parade ground today, have reposed their full faith in the leadership of Imran Khan", he said.

Thanking the people of AJK for their full participation in the rally, the AJK Premier said that he owed a debt of gratitude to the people who came from different cities and towns of Azad Kashmir to pay tributes to benefactor and ambassador of Kashmir.

Terming Imran Khan as the symbol of Pakistan s bright future, he said Pakistan was in dire need to have a fearless, honest and courageous leader like Imran Khan.

"Imran Khan is a naked sword against those who looted national wealth", the PM said, adding that in the presence of Imran Khan no country can dare to cast an evil eye on Pakistan.

Referring to the rising popularity of PM Khan, the AJK premier said, "Today, pictures of my leader have been posted in occupied Kashmir".

He said that after Quad-e-Azam Muhammad Ali Jinnah the pictures of Imran Khan and Pakistan Army Chief General Qamar Javed Bajwa have been posted in Srinagar, which he said was "an honor for us".

He said that Bilawal Bhutto was still an immature politician. He said that the opposition alliance would suffer a shattering defeat.

He said that Murree and changa-manga politics were doomed to fail. "My leader Imran Khan has made it clear that he will not bow down even an inch from his position", he added. Earlier AJK PM was accorded a warm welcome on his arrival to the Parade Ground, The highly charged PTI activists on the occasion raised slogans in favour of Prime Minister Imran Khan and Prime Minister Sardar Abdul Qayyum Niazi".