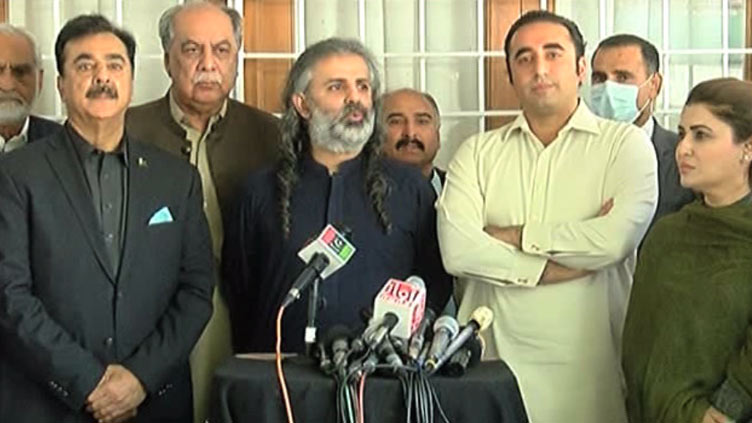 Leader of JWP Nawabzada Shahzain Bugti, while talking to media persons along with Pakistan People Party (PPP) Chairman Bilawal Bhutto Zardari announced his resignation from federal cabinet as Special Assistant to Prime Minister (SAPM) and blamed PTI government of not fulfilling its promises and doing enough to solve problems of Balochistan.

Shahzain Bugti went on to say that Prime Minister did not gave attention to far flung and underdeveloped areas despite making promises and raising slogans of change.

“I have done everything except for banging my head into the wall. Imran Khan says everyone is corrupt. [But] put the evidence in front of the people, they will decide. But all you do is use wrong words.”

He added that the government had announced a development package for South Punjab but had ignored Balochistan. "You couldn’t allocate Rs4bn for the province. Do you consider the province your last priority?"

On the occasion, Bilawal Bhutto termed Bugti’s resignation a "brave decision". The PPP chairman said that the MNA had tried to work with the government during the past three years but it had "betrayed the people and the opposition", adding that PM Imran had "used his allies".

Thanking Bugti, he said that the MNA had sent a message to the people of the country. "The people are looking to us to solve their problems. Balochistan’s issues are complicated and our history has not been fair with the people of the province."

Commenting on the premier’s "surprise" for the opposition, the PPP chairman said that PM Imran had "lost his power".