Opposition leadership appear before SC in plea against D-Chowk rallies 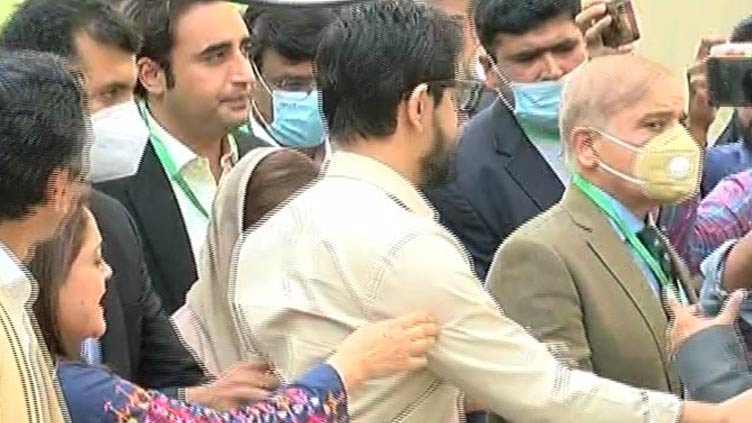 Opposition leadership appear before SC in plea against D-Chowk rallies

Leadership of joint opposition has appeared before the apex court.

ISLAMABAD (Dunya News) – Leadership of opposition parties have appeared before Supreme Court of Pakistan on Supreme Court Bar Association’s (SCBA) petition against rallies by political parties ahead of the no-trust vote against Prime Minister Imran Khan in the National Assembly.

Bilawal Bhutto, while talking to media persons, reiterated that they are continuing their political struggle and said that one hopes that political decisions are taken as per law.

During the last hearing of the petition, while referring to storming of Sindh House by workers of ruling Pakistan Tehreek-e-Insaf (PTI), Chief Justice of Pakistan (CJP) Umar Ata Bandial remarked that the incident was against freedom of expression and protest.

The chief justice further said that members and institutions should be provided security as per constitution and warned that storming of a public property is a bailable offence.

The apex court further remarked that political process should be held as per law and constitution of the country and hoped that all political sides will show restraint.