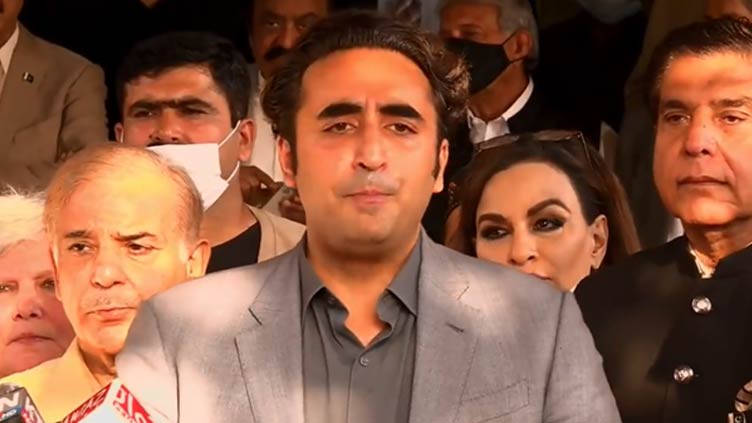 Addressing a press conference along with other opposition leaders in Islamabad on Saturday, he said that Imran Khan has lost the confidence of the majority of members and his government is dissolved for all practical purposes and we are progressing towards the restoration of democracy.

The PPP chairman said Imran first used foul language and now has resorted to use force, adding that he first attacked the parliament lodges which are the extension of the parliament and yesterday attacked the federation by attacking the Sindh House.

“Imran Khan is conspiring against democracy by using violence and is creating a constitutional crisis,” he said and added the PM wants to give an opportunity to the third force to intervene.

Bilawal said that Imran who calls himself a sportsman and he should display a sportsman spirit and must not start ball tempering at the end of the inning.

The PPP chairman said that the Speaker wants to violate law, rules and the constitution, adding that he must call the session on Monday so the proceeding of the no-confidence motion starts and if the session is not called or the process of no-confidence does not start after offering prayers and Fateha for the members who have passed away, then we will see how they are able to hold the OIC conference.

“The national and international situation demands for the law, rules and constitution to be followed and if this does not happen, then we will keep sitting there until we do not get our right.”

Responding questions by the journalists, he said that Imran has been defeated and the bureaucracy is not bound to take any order from him. The president should also not take any suggestion by Imran Khan. The entire lawyers’ community has filed a petition in the Supreme Court which is being heard.

He also appreciated the Supreme Court for taking notice of the attack on the Sindh House. The opposition wants for the OIC conference to be held peacefully but the Prime Minister has ruined the environment. If the Speaker starts the no-confidence motion after the Fateha then there will be no problem, Chairman Bilawal said.