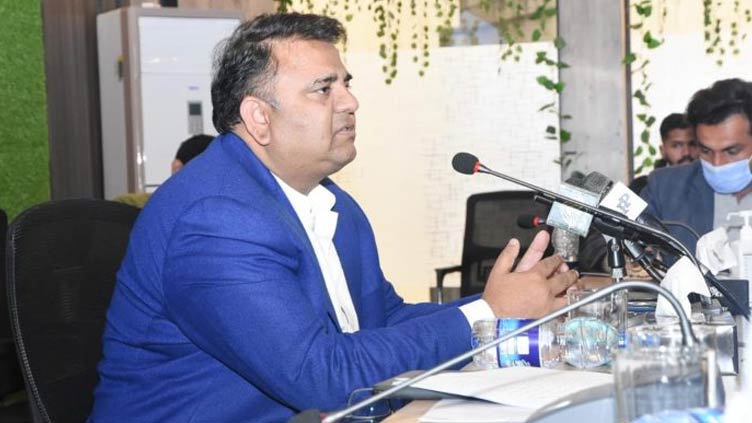 ISLAMABAD (Dunya News) – Minister for Information and Broadcasting Chaudhry Fawad Hussain Wednesday said the imminent failure of no-trust motion would prove to be a fatal blow for the opposition and draw curtains on its politics once and for all.

“These are the last days of opposition in the politics and once this politics (no-trust bid) is over, Pakistan will move ahead further,” he said while talking to the media along with federal ministers and senior party leaders here after a high-level meeting of the PTI.

Fawad dared the leaders of both Pakistan Muslim League-Nawaz (PML-N) and Jamiat Ulema Islam-Fazal (JUI-F) to hold even a single public meeting like the ones addressed by Prime Minister Imran Khan.

They (opposition) had again announced that there would be a ‘long march’ on March 25, he said, adding the ‘long marches’ and ‘public meetings’ could not be made successful while relying on the seminary students only. “Show some courage and do a “Jalsa” like Imran Khan,” he said while referring to the prime minister’s ongoing massive public meetings, which were being thronged by the people voluntarily.

In a reference to the no-trust motion, he said the PTI had not only dealt with them publicly but also in the Parliament.

Commenting on the reaction over his statement about the scheduled public gathering of Pakistan Tehreek-e-Insaf’s (PTI) here at D-Chowk, he said politics was not the job of “faint-hearted” people.

The minister alleged that the scourge of horse-trading had again been revived as evident from the “meena bazar of mules and horses” at the Sindh House. The “open sale and purchase of the loyalties of legislators” was underway and the Election Commission of Pakistan (ECP) should come into action to stop the practice, he added.

The ECP, he said, should also issue a notice to the Pakistan Muslim League-Nawaz as its leader Javed Latif had confessed of the party’s indulgence in the horse-trading.

Fawad welcomed a recent statement of Punjab Assembly Speaker Chaudhry Parvez Elahi in which he acknowledged that the prime minister was an honest person and brushed aside the notion about his party’s support for the opposition’s no-trust move.

He said he wanted to congratulate the nation and the Muslim Ummah as the United Nations had designated March 15 as an “International Day to Combat the Islamophobia” due to the efforts of prime minister, who had constantly highlighted the issue at world fora.

The minister said the government would continue the independent foreign policy, which had given the country a new identity at international level.