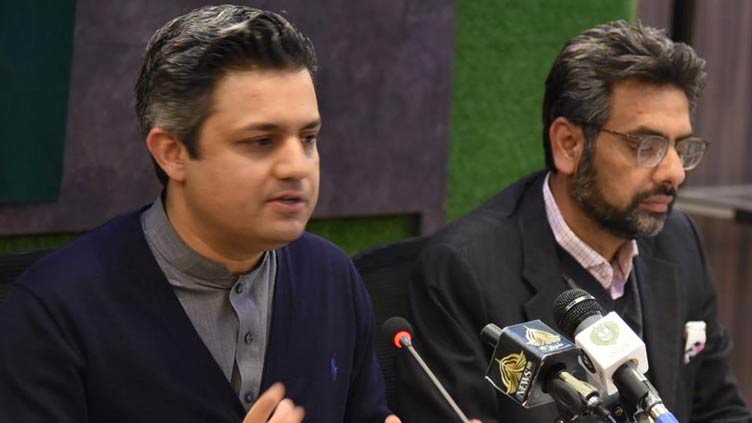 ISLAMABAD (Dunya News) – Minister for Energy Hammad Azhar on Thursday expressed the hope that national economy would grow at 5.4 per cent during the current fiscal year.

Addressing a press conference here, the minister said today there was good news for national economy as it registered a growth of 5.37 per cent during the last year against the projected 3.9 per cent growth.

The national economy did not only register a sustainable growth but also country’s exports, remittance and foreign reserves witnessed upward increase during the said period, he said.

He expressed the hope that the country exports would not only cross $ 30 billion bench mark but also the foreign remittance would also remain above $ 30 billion during the current fiscal year.

He said that $ 10-11 billion debt has also returned besides curtailing flow of circular debt to Rs 130 billion during last year.

The minister said the Pakistan Muslim League (PML-N) past achieved 5.4 per cent growth during its last year of tenure but the flow of circular debt was around Rs 450 billion besides sharp decline in exports and country’s highest over current account deficit of $ 20 billion. All the crediting agencies also reduced the ranking of Pakistan during PML-N last year, he added.

He said the PTI government not only achieved 5.37 per cent growth during its third year of rule but also the current account deficit remained below $ 2 billion. The foreign remittance witnessed sharp increase and the revenue collection also registered 35 per cent increased during the last year, he added.

He said the government had to take “tough decisions” to stabilise the economy. Owing to the government’s prudent policies the country’s reserves, exports witnessed an increase and international rating agencies upgraded Pakistan’s economic outlook, he added.

He said PTI government inherited fragile and weak economy. However, the incumbent government not only put the economy on right track but also achieved all financial targets a despite numerous challenges included COVID-19 pandemic.

The minister said prices of various commodities witnessed increase at international market resulting inflation which was also a challenge for us. The inflation has affected the middle class particularly salaried one. However, he said the government would provide relief to them.

Hammad said the government was paying Rs 800 billion to the power plants under head of capacity payment. We have to sustain this momentum, he added.

He said all these were the result of the basic reforms introduced by the incumbent government in various sectors. The reforms process would also continue in the future, he added.

Earlier, expressing deep grief over Lahore’s blast, the minister said the government would carry out complete investigation into the incident and culprits involved in it would be netted very soon.

Such unscrupulous elements would not be allowed to vitiate the peace and tranquility in the country, he added.

Replying to a question, he said jobs opportunities were also increasing due surge in large scale manufacturing. The government increased the support price of wheat from Rs 1300 to Rs 2000 per maund.

The government has also extended two programmes including Ehsaas and Insaf Health Card to provide maximum relief to the masses.

Regarding fuel cost adjustment, the minister said the PML-N government has set up expensive power plants based on imported fuel including coal and RLNG. The prices of coal and RLNG also witnessed upward trend in the international market, he added.

He said around 20 gas companies in UK have bankrupted due to increase in prices of gas at international market.

To a separate question, the minister said uninterrupted gas supply was being provided to 1870 industrial units, fertilizers companies and power plants.

To another question, he said there was complete ban on new gas connection across the country. The ban was not imposed for the first time rather the PPP government had also banned new connection in 2011 and continued till 2017. However, the PML-N government lifted the ban during its last year on political grounds, he added.

Regarding shortfall of urea, he said over 450,000 bags were being produced daily.