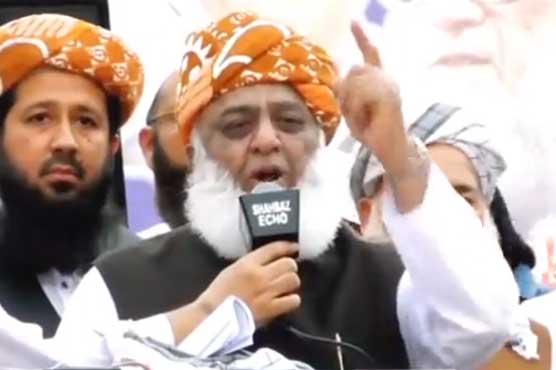 QUETTA (Dunya News) – Pakistan Democratic Movement (PDM) Chief Maulana Fazlur Rehman announced that the union of all opposition parties along with Jamiat Ulema-e-Islam - F (JUI-F) will not accept any enforced legislation done by government. He added that 25 July 2018 is considered as Black Day whereas the same history was repeated on Nov 17.

While addressing an Ulema convocation ceremony at Hockey Chowk in Quetta, Fazlur Rehman said that people sitting in fake assembly and majority are involved in legislation of the country. Just like the bills that are being passed by enforcements, the changes in constitutions are being done the same way.

He added that in the name of making this country like Madina, the government has disrespected the governance of Madina. Furthermore, he said that PDM will have to introduce a system through which the country will be taken back from the abyss of last 200 years to the current stabilities where Europe will not be the custodian of our wealth and assets.

He went on to say that the after the incident of 911, world politics is surrounding America. He said that China will be leading the world in the economic grounds. Fazlur Rehman added that Pakistan will have to make decision of its own future.