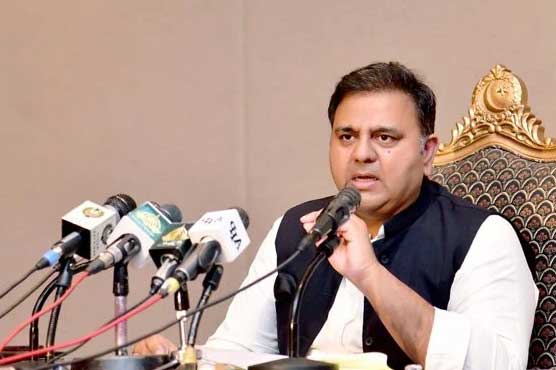 ISLAMABAD (Dunya News) – Federal Minister for Information and Broadcasting Fawad Chaudhry has said that the government has only discussed ceasefire in dialogues with proscribed Tehreek-e-Taliban Pakistan (TTP) and locals have also been included in the talks.

Addressing a press conference after federal cabinet meeting on Tuesday, he said that it was not possible for the state to remain in a state of constant war. He said only ceasefire was discussed at the moment with the banned TTP. “We want peace in the whole region, adding that the state is giving them a chance,” he said.

The minister said that the talks with the TTP were being in line with the constitution, adding that the banned TTP is not an organisation but it has several groups and the dialogues with them could be successful only after they accept the constitution.

Chaudhry said the new Afghan government also wants peace in Pakistan, adding that being Muslims and as neighbors we are concerned about the situation in Afghanistan.

The information minister further said that the federal cabinet has decided to send sufficient amount of wheat flour and rice to Afghanistan to help Afghan people dealing emerging humanitarian crisis.

He said the cabinet has also decided to ease imports from Afghanistan to Pakistan. To reinforce Pakistan s humanitarian efforts for Afghanistan, the forum also decided to set up a fund for collecting contributions to help Afghan people, who are already suffering from food shortage.

Chaudhry said: “According to a recent report of the United Nations, 23 million Afghan people are facing food shortage in current situation while minor children are being sold to get food stuff.” He said in this regard we are trying our best to convey our concerns to the world community and it is the high time to take action to avert an emerging humanitarian crisis in the worn torn country.

“During Foreign Ministers  upcoming meeting of OIC member countries in Islamabad, we will appeal the Muslim world to extend a helping hand for Afghan people,” he said and also appealed the world community to release assets of Afghanistan so they can deal with the current situation where common people are suffering.

Commenting on domestic issues, the minister said PM Imran has directed our Parliamentarians to ensure their attendance during the ongoing sessions of National Assembly and Senate as we aim to pass important legislation from the joint sitting of the Parliament.

He said trade agreement with Afghanistan has been extended for another six months.

Answering a question, the Minister said Pakistan wants an inclusive government in Afghanistan. He said we will recognize the Afghan Government after it is recognized by the regional countries.