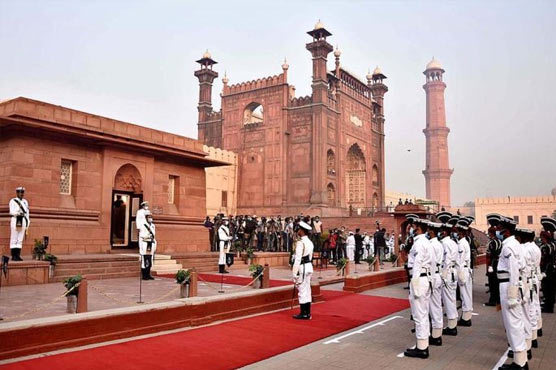 A smartly turned out contingent of the Pakistan Navy assumed ceremonial guard duties with traditional spirit and enthusiasm. Meanwhile, Pakistan Rangers moved out of the mausoleum.

Pakistan Navy Lahore Station Commander, Commodore Amir Iqbal Khan was chief guest on the occasion. He laid a floral wreath at the grave of Dr Iqbal, and prayed for progress and prosperity of the country on the occasion. He also penned down his impressions in the Visitors’ book.

Later, Punjab Governor Chaudhry Mohammad Sarwar laid the floral wreath at the grave of Dr Iqbal, offered Fateha and recorded his impressions in the Visitors’ book.