Spoilers shouldn't be allowed to play with global efforts for peace in Afghanistan: FM Qureshi 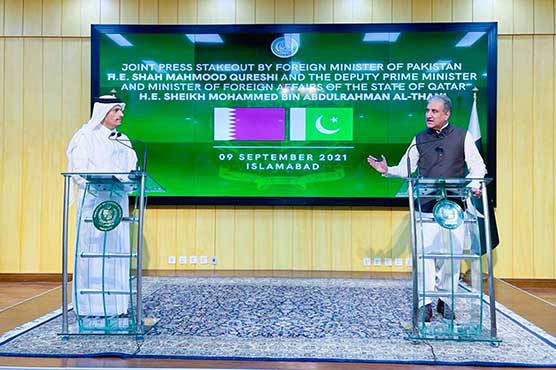 Spoilers shouldn't be allowed to play with global efforts for peace in Afghanistan: FM Qureshi

ISLAMABAD (Dunya News) – Foreign Minister Shah Mahmood Qureshi said on Thursday that Pakistan and Qatar have agreed to continue playing a constructive role to avoid any humanitarian crisis in Afghanistan.

Addressing a joint news conference with Deputy Prime Minister and Minister of Foreign Affairs Qatar Sheikh Mohammed bin Abdulrahman Al-Thani in Islamabad on Thursday, after the delegation level talks between the two sides, he said that both the countries share joint vision of peace, stability, and prosperity in Afghanistan. 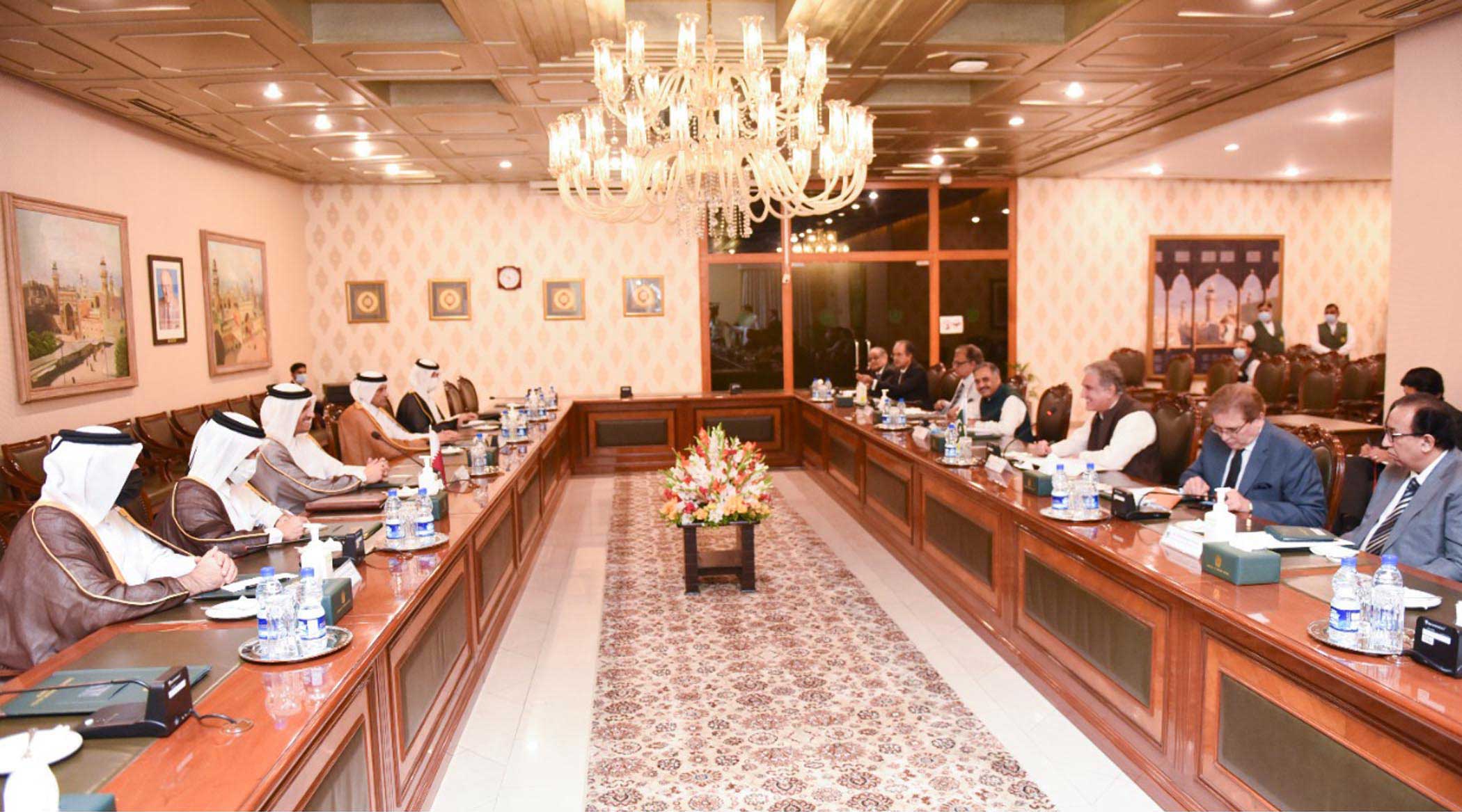 Qureshi said that the world international community should come forward to extend financial and humanitarian assistance to the people of Afghanistan. 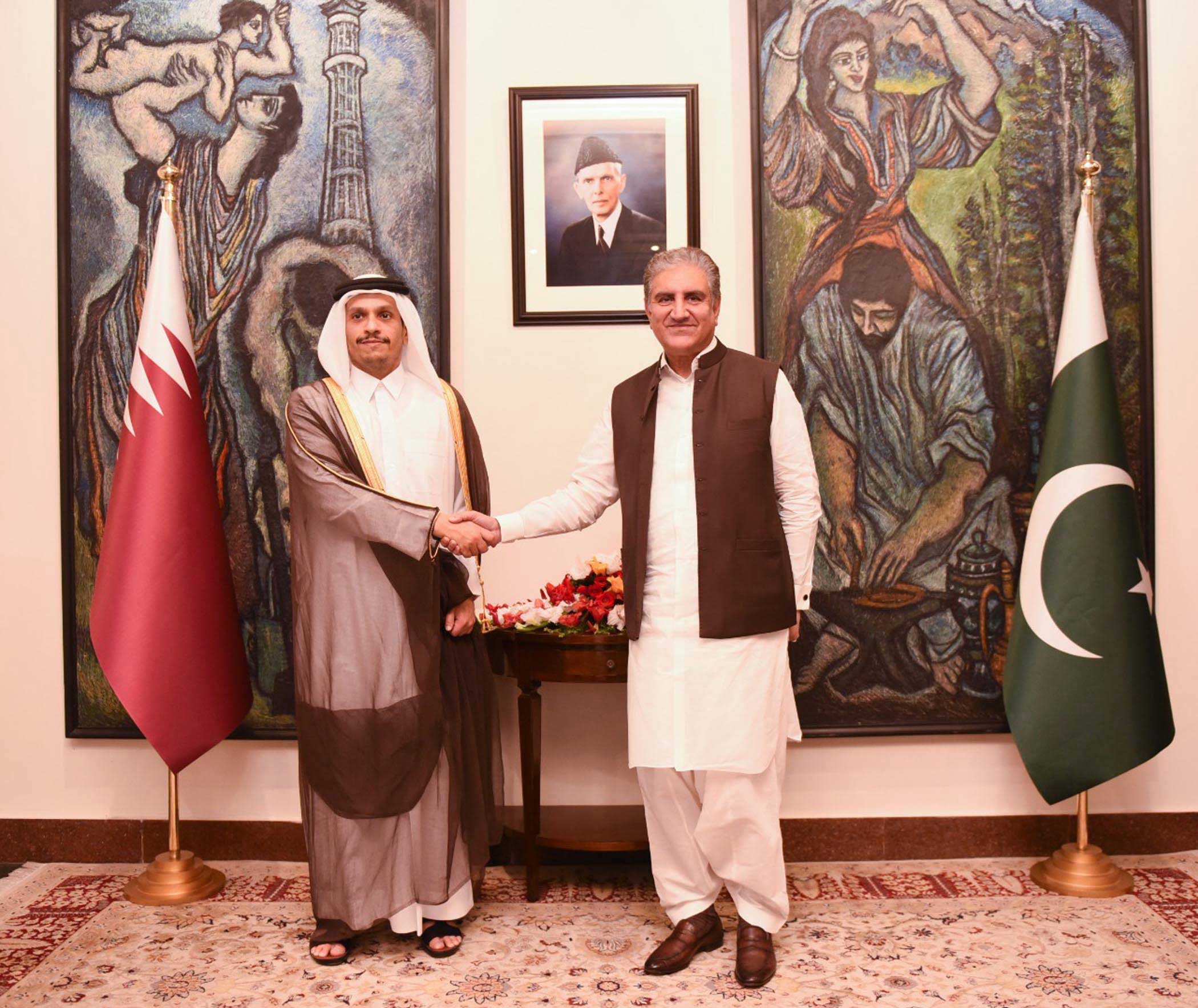 The foreign minister said spoilers should not be given an opportunity to play with the global efforts for peace in Afghanistan.

Qureshi underlined the need for a more coordinated approach on the unfolding situation in Afghanistan.

After the talks with different foreign ministers, a new forum of neighbouring countries emerged to deal with the immediate challenges of Afghan refugees and border trade. The special representatives of these countries held a meeting on September 5 and he informed them about his country’s viewpoint on Afghanistan, Qureshi continued.

He said he exchanged views with the Qatari minister about collective steps that were needed to be taken to keep Afghanistan peaceful, secure and stable and ensure that Afghanistan should not become a haven for proxy wars. “There are spoilers within Afghanistan and beyond. We have to collectively scuttle designs of these spoilers to avoid confusion and chaos in Afghanistan.”

Qureshi stressed that the immediate challenge was to avert a humanitarian crisis in Afghanistan, adding Pakistan had already sent food and medicine to the neighbouring country through land and air. He appreciated the constructive role of Qatar in avoiding a human catastrophe in Afghanistan.

He was of the view that no country should attach political conditions and focus on saving lives of Afghan people, adding that the world was watching the conduct of the new Taliban government, seeing whether it would live up to the statements made by its leadership. Even if the countries were not immediately ready for economic aid, they should not take steps that leads to economic collapse in Afghanistan, he remarked.

The contributions of the international community, made in the last two decades should not be wasted and the world should build further on its achievements, he asserted. He said during the talks with the Qatari minister, they also discussed bilateral relations and delved on challenges to be overcome to transform the brotherly and excellent relations to a new level of strategic ties. “The mechanism like joint economic commission will be used to promote the ties further.”

Pakistan was facilitating the provision of food items to Qatar, contributing to its food security while 0.2 million Pakistanis were already making contributions to the economy of Qatar, he added. He offered cooperation of Pakistan for the FIFA world cup and future economic endeavours.

In his remarks, Qatari foreign minister said Pakistan and Qatar had strong brotherly relations and “our leadership has the vision of upgrading the ties to multi-disciplinary relationship”. “We appreciate the contribution of Pakistanis in Qatar and we look forward to more contribution of Pakistani citizens.” He appreciated role of Pakistan in supporting peace process in Afghanistan and the mediation efforts of Qatar and other countries.

Pakistan played a leadership role in the efforts for a peaceful and stable Afghanistan, he said adding, “We have a shared vision for Afghanistan. We desire to see stability in Afghanistan as soon as possible.” He agreed that humanitarian assistance should be independent of the political process in Afghanistan.

The minister said Kabul airport had been operationalized and a flight of Qatar airways departed from airport today. “We are expecting from Taliban to transform their positive statements into actions. We will encourage Taliban to be more inclusive as we want to see a peaceful and stable country. Along with other countries, Qatar supported a peaceful transition in Afghanistan.” “We don’t want a negative impact on the neighbouring countries so we don’t want any crisis in Afghanistan.”