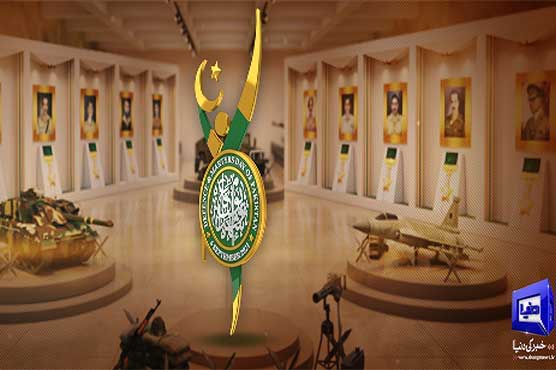 The day dawned with 31 gun salute at the Federal Capital

ISLAMABAD (Dunya News) - Defence and Martyrs’ Day was observed today to pay tributes to the martyrs and Ghazis and reaffirm commitment to defend the motherland against all threats.

It was on this day in 1965 that the Indian forces crossed international border in the darkness of night to attack Pakistan but the nation foiled nefarious designs of the enemy.

This year’s Defense and Martyrs’ Day theme was "Our martyrs our pride, salute to all the relatives belonging to ghazis and Shaheeds.”

Special prayers were offered after Fajr in mosques for the progress and prosperity of the country and independence of Indian Illegally Occupied Jammu and Kashmir from the cruel clutches of India.

President and the Prime Minister in their separate messages on the occasion of Defence and Martyrs Day have renewed the pledge that brave Pakistani nation will never compromise on its sovereignty, security and territorial integrity.

President Dr. Arif Alvi in his message said Pakistan, being fully cognizant of developments in its neighborhood is committed to securing peace, and prepared to thwart any plot hatched to hamper peace.

He commended the security agencies for their relentless efforts towards exposing the enemy carrying out covert activities.

Dr. Arif Alvi emphatically stated that Pakistan will never back away from its principled stand on the issue of Indian Illegally Occupied Jammu and Kashmir.

Prime Minister Imran Khan in his message said the gallant soldiers and officers, pilots and sailors fought bravely and did not care for their own lives and defended the frontiers by offering supreme sacrifice.

He said India today stands exposed before the world community for its bid to hamper peace in the region, especially with reference to Pakistan.

The Prime Minister said due to our government’s proactive diplomacy, the international community is now convinced that the persecution of minorities across India and the atrocities unleashed on innocent Kashmiris in Illegally Occupied Jammu and Kashmir must end forthwith.

Imran Khan said India will have to give Kashmiris their due right to self-determination, under the UN Security Council resolutions; sooner the better.

An investiture ceremony of change of guard in connection with Defence and Martyrs’ Day was held at Quaid-i-Azam mausoleum in Karachi on Monday morning.

The cadets of Pakistan Air Force assumed the responsiblity of guard at the mausoleum.

September 6 day of renewal of pledge to sacrifice lives for motherland: Fawad

Minister for Information and Broadcasting Chaudhry Fawad Hussain said that the sun of September 6 rises every year to commemorate the day with renewal of national commitment to sacrifice lives for the homeland.

In a message on the occasion of Pakistan Defense Day, he said that on September 6, 1965, brave armed forces of Pakistan thwarted the enemy’s evil designs alongside the entire nation made this day a symbol of courage, self-sacrifice and national unity forever.

“The nation will not spare any effort to protect the motherland together with the Armed Forces of Pakistan”, he said. “Pakistan Defense Day is the best reflection of our national unity,” the minister remarked.

Celebration of Defence Day is to protect Pakistan’s geography, ideology and democracy: Bilawal

Chairman Pakistan Peoples Party (PPP) Bilawal Bhutto Zardari has said that the sacrifices of the martyrs, the unwavering determination of the soldiers and the invincible unity of the people of Pakistan is our strength and the guarantee of our bright future.

In his message issued on Defence Day, the PPP Chairman said that the struggle of PPP is to make Pakistan stronger to strongest.

Greeting the nation on Defense Day of Pakistan, Bilawal said that the befitting celebration of Defence Day of Pakistan is to protect geography, its ideology and democracy.