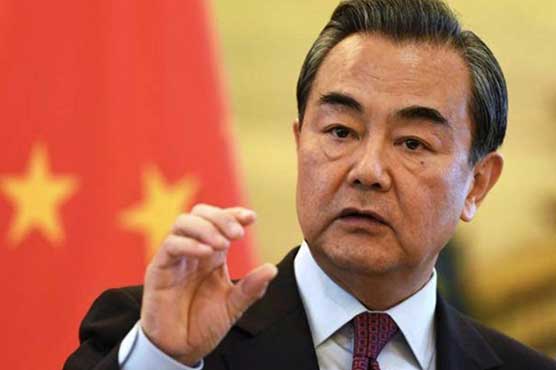 BEIJING (Dunya News) – China and Pakistan should strengthen communication and coordination on Afghan issue to support a stable power transition in the country and peace in the region, Chinese State Councilor and Foreign Minister Wang Yi said.

“As responsible neighbors to Afghanistan, China and Pakistan need to strengthen communication and coordination to support a stable transition in the country, and play constructive roles in maintaining regional peace and stability,” Wang Yi made these remarks during a phone conversation with Foreign Minister Shah Mahmood Qureshi, according to a press release issued by Chinese Ministry of Foreign Affairs on Thursday.

Wang Yi said that the two countries should encourage all Afghan parties to strengthen solidarity, and establish a new broad-based and inclusive political structure that is suited to the Afghan national conditions.

“China and Pakistan should also support Afghanistan in its fight against terrorism, to prevent the country from becoming a hotbed for terrorism again, he added.

The two countries using their unique role as neighbors, should promote international cooperation involving Afghanistan in an orderly manner also and promote the situation in Afghanistan gradually into a virtuous circle, he added.

Foreign Minister Qureshi thanked China for its good wishes for Pakistan’s Independence Day and its long-standing support for Pakistan’s nation-building.

He said that Afghanistan’s future requires a negotiated political solution and added, the Taliban takeover of Kabul has not caused bloodshed while the internal order in Afghanistan has stabilized and life gradually returned to normal.

All parties should support Taliban in fulfilling its commitments to protect the rights and interests of the Afghan people, he added.

Pakistan is ready to strengthen communication with China, push Taliban to work with all parties to form an inclusive and broad political framework and set up a multilateral cooperation mechanism, he added.

He urged the international community to jointly support the efforts of the Afghan factions to achieve peace and stability.

During the talk with Pakistani Foreign Minister, Wang also brought up the Dasu terrorist attack, hoping that Pakistan will make every effort to arrest the perpetrators, and punish them in accordance with the law.

Foreign Minister Qureshi said that Pakistan will do its utmost to catch the perpetrators of the Dasu terrorist attack, identify the forces behind the attack and severely punish them.