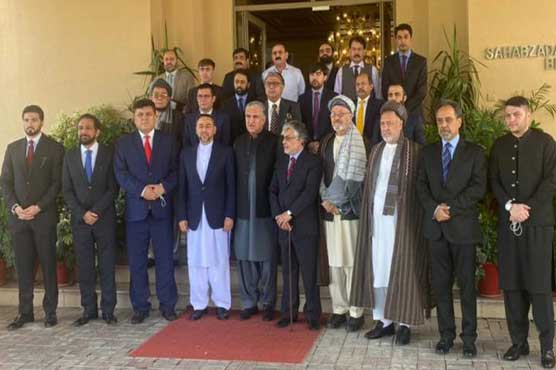 ISLAMABAD (Dunya News) – A delegation of Afghan political leaders visiting Pakistan Thursday called for an all inclusive political solution in Afghanistan through power sharing and decentralized government, believing that any monopolistic set up was bound to fail.

Addressing a press conference here, Younus Qanooni along with other delegation members, spoke high of the government of Pakistan’s positive approach towards Afghanistan and desire for a comprehensive political settlement in the country.

They said the change of approach was visible in Naya Pakistan as the leadership wanted to leave the past behind and looked towards the future for stronger bilateral ties.

The delegation members told media that the discussion with Pakistan leadership focused on all inclusive set up in Afghanistan representing all ethnic groups of the country. Another objective was to prevent bloodshed in the country.

They thanked Pakistan’s leadership for giving assurance to play their all out role for a peaceful Afghanistan which was also inevitable for a stable Pakistan. He said the whole leadership had unanimity of views towards Afghanistan and wanted to start a new chapter of relations with the neighboring country.

The delegation members believed that the government of one group as experienced in 1996 had failed and was bound to fail in future too owing to the multi-ethnic nature of the Afghan society.

They said another priority was the protection of rights of the people including women and children besides freedom of expression and voting rights.

To a question, Qanooni said the Taliban could capture the land but not the people until they form an inclusive government and fulfill their commitments for protection of all communities’ rights including the minorities.

About the escape of Ashraf Ghani and reports of him carrying huge cash, the delegation said corruption of public money had been a practice in Afghanistan which could not be curbed until a comprehensive political system representing all groups.

The delegation members told media that a larger delegation would also visit other countries to seek support for their demands, and said the process has started from Pakistan being a major player in the region with a big border with Afghanistan.