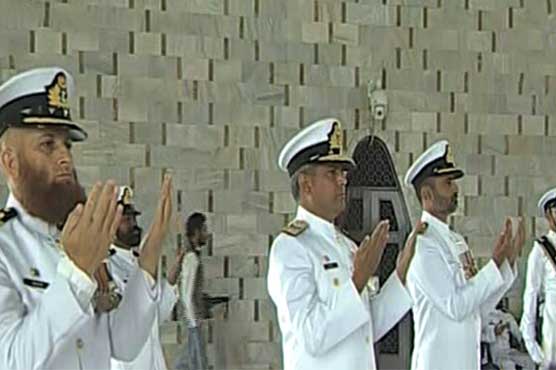 Commandant Pakistan Naval Academy was the chief guest of the ceremony.

A smartly turned out contingent of the cadets from the Pakistan Naval Academy assumed ceremonial guard duties at the mausoleum with traditional spirit and customary enthusiasm.

Commodore Sohail Ahmed also laid a floral wreath at the mausoleum of Founder of Pakistan and offered Fateha.

Meanwhile, a graceful change of guard ceremony was also held at mausoleum of Dr Allama Muhammad Iqbal in connection with the Independence Day of Pakistan in Lahore today.

A smartly turned out contingent of Pakistan Army assumed the guard duties at the Mazar-e-Iqbal.

Marching to the band tunes, the contingent of took positions at the four corners of the Mazar.

The ceremonial guard mounting was followed by floral wreath laying at the Mazar of Allama Iqbal by General Officer Commanding 10-Division Major General Muhammad Aneeq-ur-Rehman Malik to pay homage to the National poet.