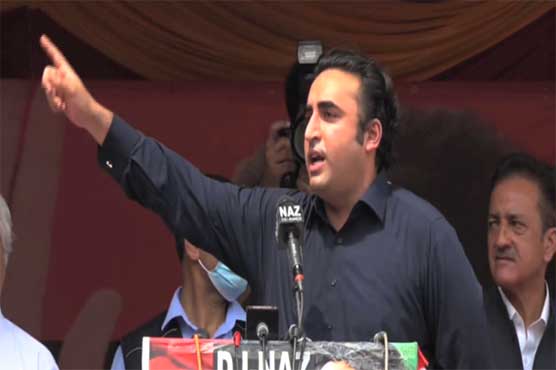 We will oust selected prime minister as well as Usman Buzdar: Bilawal Bhutto

RAWALAKOT (Dunya News) – Chairman of Pakistan Peoples Party (PPP) Bilawal Bhutto Zardari on Wednesday said that they will head towards Bani Gala and will throw out the puppets.

Addressing a political rally in Azad Kashmir, PPP Chairman said his party is challenging the puppet government from last three years and stressed on unity for ousting the incumbent government.

Criticizing leadership of Pakistan Democratic Movement (PDM), Bilawal said that PPP brought former president Asif Ali Zardari from hospital and Khurshid Shah from jail to National Assembly to give tough time to government during budget session but unfortunately leaders of other opposition parties were not present. Fazlur Rehman should issue show cause notice those members who were absent from budget session, he demanded.

Bilawal Bhutto further said that people who were talking of kill or cure are now involved in politics of ‘holding feet’ but PPP which has laid down lives and will never do such politics. We will oust selected prime minister as well as Usman Buzdar, he vowed.