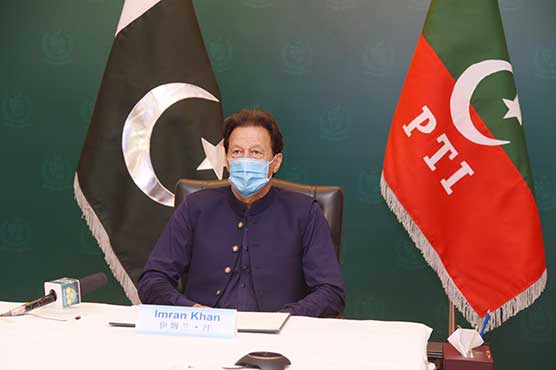 ISLAMABAD (Dunya News) – Prime Minister Imran Khan on Tuesday felicitated Communist Party of China (CPC) on the 100th founding anniversary and said that the vision of the Communist Party leadership ignited the spirit of the Chinese nation.

PM Imran Khan made the remarks while delivering a keynote speech at the CPC and World Political Parties Summit via video link in Beijing.

Lauding efforts of the Chinese leadership especially President Xi Jinping, the prime minister said that CPC’s had led to all round national development and poverty eradication in China, a great achievement, and hoped that these measures would be emulated by Pakistan. He said the CPC leadership had opened new vistas of thoughts for the political parties across the world.

President Xi played pivotal role in poverty elimination in China, he said, terming it ‘the greatest achievement in the history of mankind’.

Imran Khan said in an era of complex and profound changes at global and regional level, ‘all weather strategic cooperative partnership’ between Pakistan and China remained a strong anchor for peace, progress and prosperity. He reiterated Pakistan’s support to China’s efforts to safeguard world peace, contribute to global development, and preserve international order.

In the wake of emerging global and regional environment, the prime minister said Pakistan had recalibrated its priorities from geo-politics to geo-economics. “China-Pakistan Economic Corridor (CPEC), the flagship project of BRI, complements Pakistan’s renewed efforts of this geo-economic shift with emphasis on economic integration and regional connectivity,” he said.

The prime minister said the abiding friendship with China and the CPEC complemented this vision of peace for themselves and for others, and shared prosperity and common development for their region and the world. “Pakistan and China are ‘iron brothers.’ We support each other on issues of our respective core interests,” he added.

In the virtual summit themed with ‘For the People’s Well-being: the Responsibility of Political Parties,” the prime minister further said CPC’s mission of ‘Great Rejuvenation of the Chinese nation’ and PTI’s vision of ‘Naya Pakistan’ reflected the respective aspirations of the people of our two countries. “Our two parties also share the spirit of struggle, commitment and fortitude,” he added.

Dilating upon his government’s major achievements, he said the Ehsaas Program launched by PTI government last year was one of the leading social protection programmes in Asia. In its second phase, they envisaged to provide social protection to 8 million of the country’s poorest citizens, he added.

The prime minister said they also made universal health coverage a priority in the health sector reforms. Under the ‘Ehsaas Sahulat’ program, they aimed to provide free of cost health insurance initially to the families living below the poverty line, and subsequently to all remaining families, he further informed.

About, 10 Billion Tree Tsunami project, the prime minister said it reflected their commitment to countering environmental degradation and reversing biodiversity loss. “We are ready to contribute more than our share to protect this invaluable planet and help it heal from centuries of neglect,” he pronounced.