Exams will neither postpone nor cancel: Shafqat Mahmood 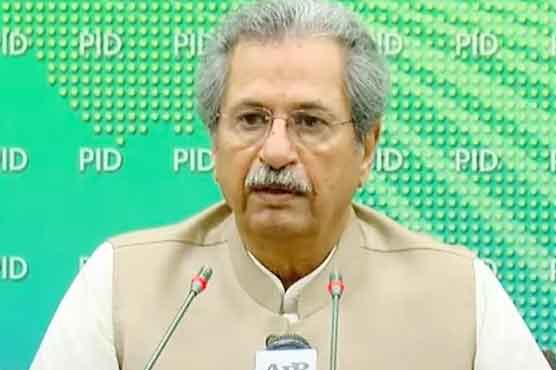 LAHORE (Dunya news) – Federal Minister for Education and Professional Training, Shafqat Mehmood on Saturday announced that examinations of educational institutions would neither be postponed nor would be cancelled.

Talking to media at launching ceremony of five Urdu and English poetry books by Farzana Aqib here at Al-Hamra Arts Council, he advised the students to continue with their studies because their examinations would not be postponed or canceled.

“No any student will be given grade without taking his or her respective examination this year. The 9th, 10th and intermediate examinations are about to start in a few days, therefore I advise the students to focus on their studies as no exam will be postponed or cancelled,”

he said and added that this was also a message for those students, who were hoping that their examinations might be cancelled, as it would not happen.

Federal Minister mentioned that conducting of educational examinations was the unanimous decision of all the provinces and the examinations would be held in accordance with the schedules announced by the educational boards.

Regarding summer vacations, he said that this matter had been given to provinces to decide about. Where the school could be opened then educational activities could continue, however,

it would not be suitable to open educational institutions where there was bad weather conditions, he maintained. “We have to make up for the loss of children’s education as well,” he added.

To a question about setting up of summer camps for children in private schools, he said that provinces would decide it, asserting that education of children had already been hampered.

Earlier, Federal Education Minister attended the books launching ceremony as chief guest. He appreciated the work and efforts of the author Farzana Aqib and said that intellectual community was the great asset of a society, because they guide the people to the light of knowledge.