Pakistan will not change relations with China under any pressure: PM Imran Khan 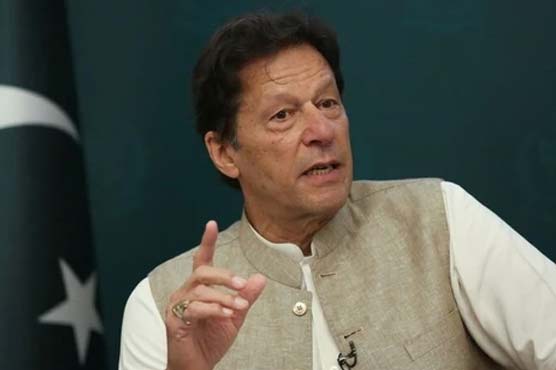 Pakistan will not change relations with China under any pressure: PM Imran Khan

"China stood by us in every difficult time."

ISLAMABAD (Dunya News) – Prime Minister (PM) Imran Khan has said Pakistan will not change relations with China under any pressure as China stood by us in every difficult time.

While talking to the Chinese media on the occasion of centenary celebrations of Communist Party of China (CPC), Imran Khan said the differences between China and the United States create complications in the region. Pakistan wants to further strengthen economic, trade and political ties with the neighboring country, he added.

Imran Khan said the next phase of China-Pakistan Economic Corridor (CPEC) is very encouraging for Pakistan. “We are hopeful that the Chinese industry will be interested in the special zones of CPEC,” he added.

Congratulating China on the 100th anniversary of the Communist Party, Imran Khan said the Chinese president is considered a modern-day politician in Pakistan. Pakistanis are impressed by Chinese president’s war against corruption, he stated.

Imran Khan remarked that changing the prevailing system was very difficult in our society. The Communist Party’s success was result of a long-term plan, he added. He said one can only plan for five years in electoral democratic system.

The prime minister said we want cooperation from the neighboring country in the field of agriculture as Pakistan is an agricultural country and we can benefit from China.

Imran Khan said by the time the Chinese leadership reaches the top positions, they already have gained a lot of experience. He said the Chinese leadership completely understands the system and they are aware of the life standards of people at grassroot level. This was the only reason China was able to get rid of poverty, he added.

He said a high-level committee has also been constituted to monitor progress on the CPEC related projects and make sure there is no impediment in their way.

Imran Khan said he is also going to Gwadar next week to oversee the pace of corridor related projects. He said his visit to China is also in the offing which will focus on further strengthening the bilateral relations.

Responding to a question, Imran Khan said China stands out the way they coped with Covid-19 pandemic. He said we are also thankful to China for donating vaccine which helped Pakistan better tackle with the pandemic.

To a question, the Prime Minister said Pakistan accepts the Chinese version on Xinjiang situation. He said it is hypocritical that there is no mention of worst human rights violations being carried out in Indian illegally occupied Jammu and Kashmir in the western media.

He said there are UN Security Council resolutions on Kashmir dispute which accept the right of self-determination of Kashmiri people.

About Afghanistan, the Prime Minister said the breakout of civil war in the country will have serious consequences for the region. Therefore, he said, Pakistan wants political settlement in Afghanistan at all costs.