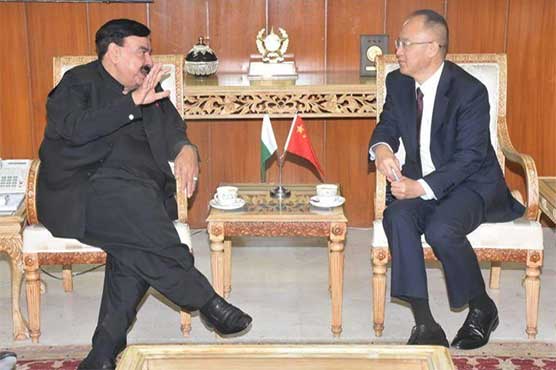 ISLAMABAD (Dunya News) - Interior Minister Sheikh Rashid Ahmed has said that the government has approved a new visa policy regarding CPEC projects and Chinese nationals. Under the new policy, the minimum period of new visas for Chinese nationals has been set at two years.

Sheikh Rashid told this during a meeting with Chinese Ambassador Nong Rong here on Thursday.

According to a statement issued by the Interior Ministry, the Minister and the Chinese Ambassador discussed issues of mutual interest including Pakistan-China bilateral relations, CPEC projects, Pak-China bilateral cooperation agreements and visa facilitation for Chinese citizens.

The Home Minister expressed happiness over the completion of 70 years of diplomatic relations between Pakistan and China. On the occasion, the Minister said that the government has approved the new visa policy for Chinese citizens.

Sheikh Rashid said that Chinese citizens would now be issued two-year work visas within 48 hours from the respective missions, adding that a separate visa category has been created for Chinese citizens related to CPEC projects. Special desks are also being set up at airports to facilitate Chinese citizens.

The Chinese Ambassador said that he was grateful to the government of Pakistan for easing visa facilities for Chinese nationals, which would further enhance the relationship between the two countries, increase investment in CPEC related projects and create new job opportunities.

Interior Minister Sheikh Rashid Ahmed thanked the Chinese government for providing the coronavirus vaccine to Pakistan while the Ambassador commended the arrangements made by Pakistan to control the pandemic.