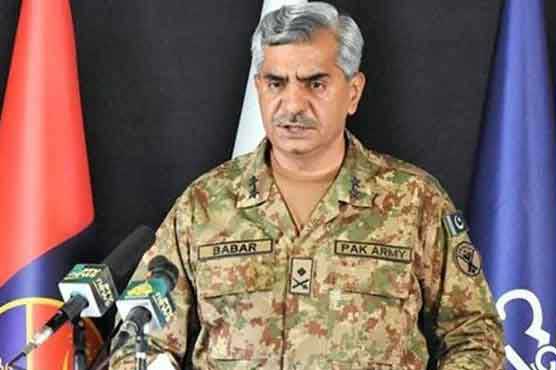 RAWALPINDI (Dunya News) – Inter-Services Public Relations (ISPR) Director General (DG) Major General Babar Iftikhar on Thursday while commenting on the contact between the Director Generals of Military Operations (DGMO) of Pakistan and India said that everyone wants peace and maintaining ceasefire is the first step.

Speaking exclusively in Dunya News program “Dunya Kamran Khan Kay Sath”, he said that the ceasefire agreement with India is a continuation of the steps taken in 2003 and after the 2003 ceasefire, the violation of LOC had reduced.

The military’s media wing chief said that Pakistan and India already have a hotline mechanism in place and the DGMOs of both the countries held talks on scheduled time and frequency and negotiations were going on under the same system. Efforts had also made to prevent ceasefire violations in 2017. The two sides agreed to implement the 2003 measures.

Maj Gen Babar Iftikhar went on to say that the move is only to the extent of the LoC and Working Boundary, adding that no matter how bad the situation is, the hotline connection remains open. “We will continue to take steps for peace which will restore trust,” he said and added no defense related construction will be made within 500 meters of the LOC. “No one s post will be directly targeted during the ceasefire. Any issue on the LOC will be resolved by the local commander.”

The DG ISPR said: “If contacts are maintained at the diplomatic level, it is a military-to-military contact, what will be the result of any backward diplomacy. There is currently no comment on this.”

He said there are no two opinions on the positive results of these measures and everyone wishes for peace, adding, “we will move in this direction and the first step is to maintain the ceasefire.”

Earlier today, in an important development to de-escalate tensions between the nuclear arch-rivals, the Director Generals of Military Operations (DGMO) of Pakistan and India had agreed on strictly observing Line of Control (LoC) ceasefire with effect from tonight.

The Pakistani military media wing has told that the discussion was held in a free, frank and cordial atmosphere. Pakistan and Indian authorities have also expressed their will to address each other’s core issues and concerns for mutually beneficial and sustainable peace, ISPR stated.

Meanwhile speaking with a private TV channel, Maj Gen Babar Iftikhar said the tea offer is still valid and those who point fingers are answered where needed.

The DG ISPR said that the people of Pakistan and the media love their army and institutions very much, adding that there is no need to create a tit for tat situation and the offer of tea remains valid.