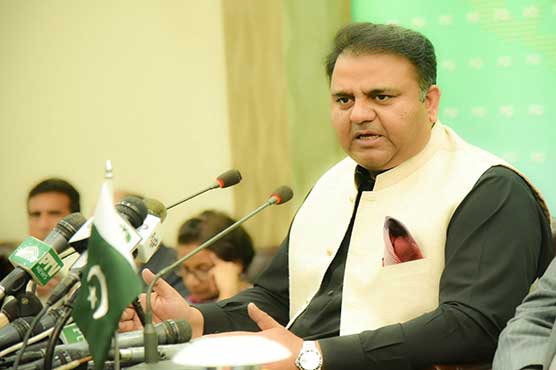 Fawad said that the Interior Ministry should bring back Nawaz Sharif.

Speaking at the launching ceremony on “Sustainable Development Goals Wall” at Quaid-e-Azam University (QAU), he termed the movement as a failed rescue operation and said that no movement can stand without moral justification. The opposition carried out the ‘Abu Bachao operation’ which failed miserably in all cities.

Fawad said that the Interior Ministry should bring back Nawaz Sharif. “Nawaz Sharif departure has caused a blow to the Pakistan Tehreek-e-Insaf narrative”.

“There should be an inquiry into how Nawaz Sharif left the country, the way he went out fraudulently is an insult to the people and the state,” Chaudhry Fawad said while urging the Punjab government to inquire into the matter.

The federal minister said the development of any country can be gauged from its universities. “Wherever changes have taken place in the world, they have been brought about by university students”.

In the United States, changes came through the universities, he said. Pakistan has over 200 universities since establishment and several universities have contributed as per international standards while a number of Pakistani scholars have contributed extraordinarily in other countries. He urged the students to take advantage from the Higher Education Commission program for resolving the local issues.

Chaudhry Fawad pointed out that there were two problems at the government level one is lack of funding and other is lack of planning. “Universities are the institutions which can provide planning for resolving the local issues”, he said. He recommended that the Punjab University should focus on resolving the issues being faced by Lahore city.

The federal minister stated that his ministry has changed the whole face of Pakistan, adding that local manufacturing of dialysis machines and X-ray machines will also start in the next four to six months in Pakistan which was importing health equipment worth 1.6 million dollars. The world’s largest health company is ready to come to Pakistan.

The health industry will achieve stability and flourish as a result of the present government’ prudent policies, he hoped. The federal minister stated that the first ever initiative of Electric vehicle policy was now moving towards four wheelers. He said the mainstream media came under pressure due to the growth of social media. “If many of the people lost jobs in the media, others made money from YouTube”, he said.

He pointed out that big changes have occurred since 2016. The business of photocopying, telegraph and text messaging has finished. In the case of electric vehicles, mechanics will not be able to work for more than ten years. While, in the next fifteen years, due to the driverless cars, thousands of drivers will be jobless. But alternately, there will also be job opportunities for thousands of data engineers.

Chaudhry Fawad said around 75,000 students took part in the doctors’ examination and only a few could pass. From next ten to fifteen years, artificial intelligence will make survival of doctors difficult.

He said the modern doctor will be a thousand times more effective than the current doctor.”Artificial intelligence will bring innovation in many fields”, he said. The biotech market will also offer amazing things in the time to come, he added. The federal minister said that the government was in efforts to give scholarships to the government schools from ninth to twelfth grade this year.

Around 10,000 scholarships will be given at the matriculation and 12,000 at Intermediate levels while separate scholarships could be given to those who excelled in mathematics, he added. He announced that 450 schools will be converted into science and technology institutions this year.

The minister disclosed that a Swedish company was investing in Pakistan for bringing cheap cars for working girls. About the WhatsApp new policy, the federal minister stated that he had also received an email on WhatsApp. “We have drafted our own law, which will be sent to the Cabinet”, he said.

WhatsApp’s problem is not just about privacy, the whole world depends on data, he said. The minister also congratulated the Vice Chancellor of QAU university for launching SDGs Wall and said it is heartening to see that our universities were growing faster. He said the time has come that a superior university should be set up in Pakistan.