Will offer PDM 'chai pani' if they march towards GHQ: DG ISPR 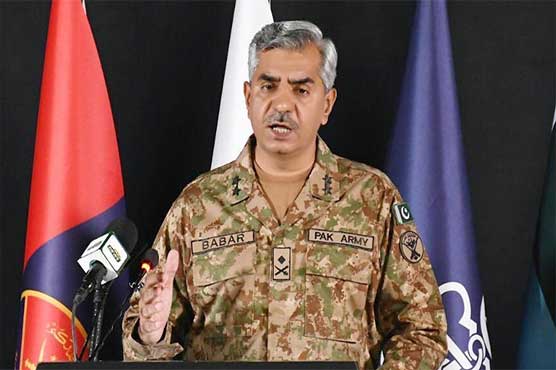 Will offer PDM 'chai pani' if they march towards GHQ: DG ISPR

RAWALPINDI (Dunya News) - Director General of Inter-Services Public Relations (DG-ISPR) Major General Babar Iftikhar on Monday has said that Pakistan Democratic Movement (PDM) doesn’t need to come to Rawalpindi and if they come, we will offer them refreshments (chai pani).

While addressing a press conference in Rawalpindi, the DG ISPR told that in 2020, the coronavirus pandemic and locust attacks badly risked Pakistan’s food situation and economy. The state, institutions, armed forces and most importantly the Pakistani people unitedly faced these challenges, he added.

The DG said that Indian forces are continuously carrying out ceasefire violations along the Line of Control (LOC), martyring several innocent civilians. Indian government doesn‘t want peace and stability in Pakistan, he stated.

Indian provocation has increased around Eastern border areas. However, Pakistan Army befittingly responds to the violations being carried out by the forces of neighboring country, he said.

While talking about the achievements of Pakistan armed forces under the umbrella of Radd-ul-Fasaad operation, Maj Gen Babar told that over 0.3 million raids were conducted to retain peace in the tribal areas.

The ratio of terror activities along the border areas was reduced by 55 percent due to the efforts of security departments. Terrorism in Karachi has been decreased by 95 percent while the cases of kidnapping for ransom have been declined by 98 percent, he went on to say.

Responding to a question related to the killing of ten miners in Macch, the DG said that Chief of Army Staff (COAS) General Qamar Javed Bajwa will depart for Quetta to express solidarity with the bereaved families. Balochistan is the future of Pakistan, he stated.

Maj Gen Babar Iftikhar asserted that the brave soldiers are sacrificing their lives for the safety of motherland. We don’t need to answer those talking against the Pakistan Army, he added.

Meanwhile, DG ISPR said that Pakistan Democratic Movement (PDM) doesn’t need to come to Rawalpindi and if they come, we will offer them a tea.