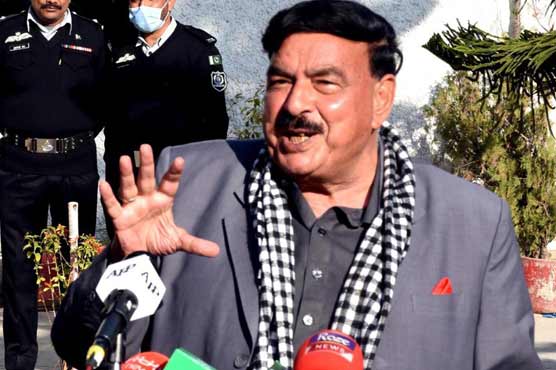 Addressing a press-conference at a local hotel after winding up of his two days visit to Khyber Pakthunkhwa and merged tribal district as Interior Minister, he said that Pakistan had no extradition treaty with Britain under which Nawaz Sharif could be brought back, adding that Prime Minister Imran Khan was fighting against scourge of corruption and no comprise would be made with corrupt elements.

He claimed that Pakistan Democratic Movement (PDM) was out to create political chaos and instability in the country besides pushing Jamiat Ulema-e-Islam-Fazl (JUI-F) chief Mualana Falzur Rehman into a blind alley, adding that the PDM chairman has currently no role in politics as his policies was already rejected by masses in 2018 general election.

Sh Rasheed said it was encouraging that PPP has decided to take part in senate election and by election and expressed the hope that PML-N would also follow the same.

The interior minister said that government has launched online visa system for 191 countries in line with vision of PM Imran Khan to make visa process easy for people. As result, he said manual visa system has ceased to exist from today.

He said the online visa system would help eradicate menace of corruption and ensure transparency besides addressing complaints of people especially with regard to China and Afghanistan. He said on the first day, the online system had received about two lakh applications for visa.

“Protection of holy places of minorities and their leadership was the top priority of the government and Chief Minister KP has been directed to take strong notice of the recent Karak’s unfortunate incident,” he said and added protection of worship places of minorities and their leadership was constitutional and legal obligation of the government and no one would be allowed to take law in their own hands.

Regarding damage of Hindu saint shrine in Karak, the minister said such incidents were not acceptable in the PM Imran Khan led government and reiterated that strict action would be taken against responsible.

Sh Rasheed said: “The use of indecent language against armed forces of Pakistan would not be tolerated and the case of JUIF leader Mufti Kifayat has been sent to KP Government for necessary action, adding law would take its own course whosoever use un-parliamentary language against the country’s armed forces.”

“We have taken serious notice of armed wings of political parties and was considering to impose a ban on these wings,” he said.