Pakistan takes up attack on UNMOGIP Observers by India with UN 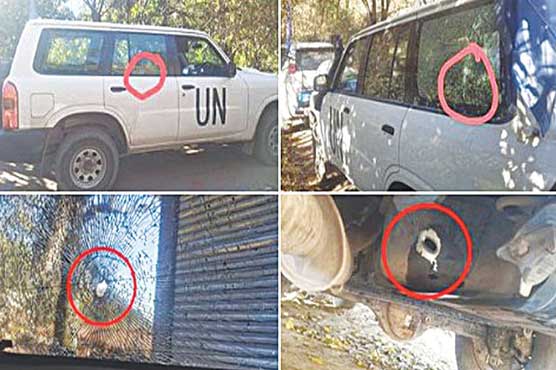 Pakistan takes up attack on UNMOGIP Observers by India with UN

ISLAMABAD (Dunya News) – Pakistan has taken up the reprehensible attack by India on the United Nations Military Observer Group in India and Pakistan (UNMOGIP) Observers and their vehicle along the Line of Control (LoC) with the United Nations, urging it to initiate a transparent investigation into the incident.

In a letter addressed to the UN Secretary General (UNSG) and the President of the Security Council, Pakistan’s Permanent Representative to the UN, stated that deliberate targeting of the UN Observers and their vehicle – which was clearly marked with UN logo and flying a blue flag of the UN – appears to be a new coercive and reckless ploy by India to hinder UNMOGIP’s work, and facilitate another Indian military misadventure against Pakistan.

The letter also informs the Secretary General and the UNSC that Pakistan had credible information that the RSS-BJP Government was planning to stage a ‘false flag’ attack to divert attention from its domestic difficulties, and create justification for another misadventure against Pakistan. If that were to happen, Pakistan will exercise its right to self-defence, the letter warns.

The letter from Pakistan’s Permanent Representative requests the UN to forcefully condemn the attack on the UNMOGIP Observers and call on India to observe the 2003 ceasefire understanding. The UN must respond positively and urgently to repeated calls by Pakistan to strengthen UNMOGIP and improve its ability to observe and report on ceasefire violations, the letter contends.

Pakistan has also reminded the UN that the illegal and inhuman military siege and communications lockdown in the occupied territory had now lasted for over 500 days. Highlighting the atrocities and crimes committed by Indian occupying forces against the innocent Kashmiris since August 2019, it has been forewarned that India’s ultimate plan is to change the demographic structure of IIOJK from a Muslim majority area into a Hindu majority territory.

While drawing attention to the deteriorating situation along the LoC, Pakistan’s communication recalls that India had committed over 3000 unprovoked ceasefire violations along the LoC and the Working Boundary this year alone, primarily targeting the civilian populated areas resulting in 276 casualties, including 92 women and 68 children, out of them 27 had embraced martyrdom.