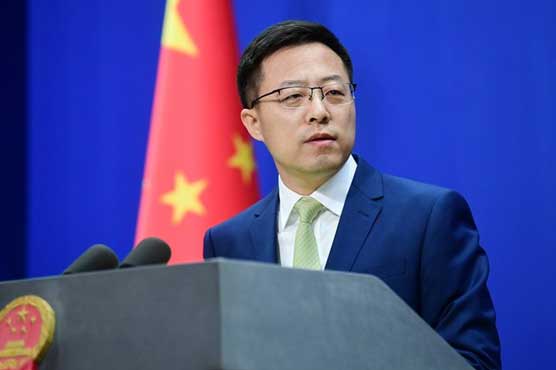 He said firmly support Pakistan's efforts in countering terrorism and safeguarding its country.

BEIJING (Dunya News) – A Chinese Foreign Ministry s Spokesman on Friday indicated that any attempt to sabotage China Pakistan Economic Corridor (CPEC) flagship project would not succeed and said both countries could work together to ensure its success, with support of the international community.

"I have already made my response to this issue. No attempt to sabotage the CPEC will succeed," Zhao Lijian made his remarks during a briefing while answering a question about Pakistan Foreign Minister and DG ISPR joint briefing during which they accused India of supporting terrorist elements and sabotaging CPEC.

He said that China opposed all forms of terrorism and also opposed double standard on counter terrorism. "China calls on the international community, the regional countries in particular, to carry out counter terrorism cooperation and safeguard collective security," he added.

Commending Pakistan on its positive contribution to global counter terrorism cause, he said that the Chinese side firmly supported Pakistan s efforts in countering terrorism, safeguarding its country and regional peace and security.

He reiterated that the CPEC was an important and pioneering project of the Belt and Road Initiative and it was not only important for common development of the two countries but also for regional connectivity and prosperity.

"We are confident that with support of the international community, China and Pakistan can work together to ensure the success of the CPEC," he said.

Recently Pakistan shared a dossier with the international community which has incriminating evidence of India harboring, training and financing terrorist networks that not only seek to destabilize Pakistan but also the disruption of the CPEC.