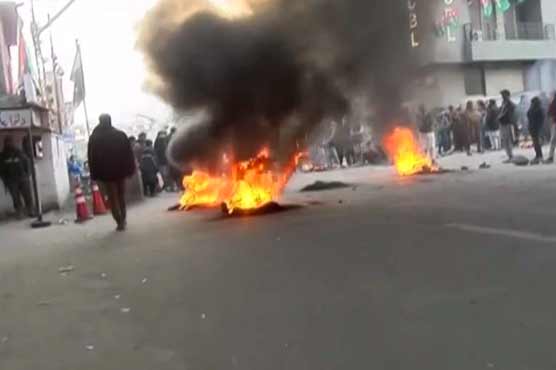 The charged workers of the PPP burned tyres outside RO office and blocked the road for traffic.

The charged workers of the PPP staged a protest demonstration, burned tyres outside RO office and blocked the road for traffic.

The die-hard PPP workers staged a sit-in on the highway at Yaseen in Ghazar district. There are reports that hundreds of PPP protesters are participating in the protest.

The PPP staged a sit-in against alleged rigging in Gilgit Baltistan elections in front of the deputy commissioner’s office in Gilgit city. The PPP candidate, Jamil Ahmed was leading by 400 votes last night in the final count but in the morning he was shown as trailing by 2 votes.

In his fiery speech he said that the PPP candidates were pressurized to leave the party and join the Pakistan Tehrik-e-Insaf but each and every one of them remained steadfast with the party except one. He said that when the authorities witnessed the support for PPP by the people of GB from Siachen to Gilgit, they got worried. The election commission started supporting the illegal acts of the PTI ministers.

He said that so much so that the chief election commissioner went to Islamabad and held a press conference in Islamabad against opposition instead of stopping government ministers from illegal acts. Even the Prime Minister Imran Khan visited Gilgit.

Bilawal said that three seats were clearly snatched from the PPP but warned that no one will be allowed to do so. He said that PPP will continue its protest at every place where rigging has occurred. We will not allow the puppet, the selected and the selectors to steal the elections. The selectors knew that PTI does not exist in Gilgit Baltistan. Everyone knows that the people of GB are with the PPP.

“The people of GB snatched their rights from Dogra Raj and they will again snatch back their rights,” he said and added he is under pressure by the people and warned the powers to be, not to push him to the extent that he takes extreme measures.

The PPP chairman asked people to continue their protest and if the seats which were snatched through rigging are not given to the people and the PPP then the protest will go to Islamabad and he will lead that protest. He said that he is not going anywhere till the rights of the people are given to them.

He said: “If the rigging is not reversed then he will choose an extreme and difficult path but that will be the path to victory, adding that he had already warned to accept the verdict of the people otherwise there will be dire consequence.”