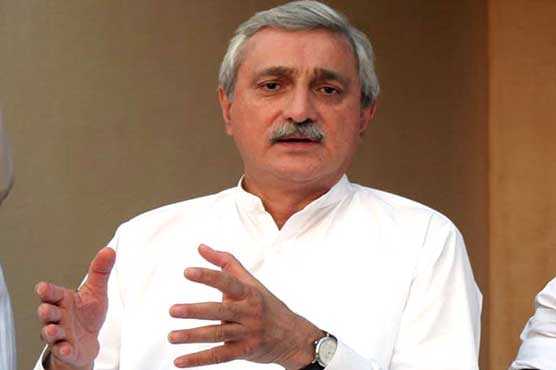 The Agricultural Task Force had been formed on the directions of PM Imran Khan.

The Agricultural Task Force had been formed on the directions of PM Imran Khan.

On the other hand, the prime minister’s close aide denied the news in a twitter post, saying he was never chairman of any task force.

Tareen also asked if anyone can anyone show his a notification with him as chairman.

Hello hello, News bring reported that I have been “removed” as C’man Agri Task Force ....I was never chairman of any task force . Can anyone show me a notification with me as C’man ??
Pl get your facts right people

Meanwhile, teams of Federal Investigation Agency (FIA) carried out raids on different sugar mills after expanding its investigation to confirm whether sugar stocks in the country were exported or imported.

The teams of the FIA raided seized records during the raids which were forwarded for its forensic investigation.

Talking informally to media persons in Lahore on Monday, Pakistan Tehreek-e-Insaf (PTI) leader and close aide of Prime Minister Imran Khan, Jahangir Tareen declared the FIA’s investigation report as political and termed it a personal attacks against him.

He alleged that the Prime Minister’s Principal Secretary Azam Khan is behind the investigation report, adding that an incomplete report was released just to make him a target.

The PTI leader said Azam Khan is making his own decisions by setting up a hierarchy around PM Imran, adding that he is himself making the schedule of meeting the prime minister.

He said that employees had been summoned from their houses during coronavirus lockdown for investigation. The politician announced that he will challenge the decision if the commission declared him responsible.

Tareen further claimed that the principal secretary is constantly harming the premier, adding that he is in contact with Imran Khan and will stand by his side.

To a question regarding threating Federal Minister for Railway, the prime minister’s close aide said that he had never threatened Sheikh Rasheed, adding that the minister was misinterpreting.

The provincial minister submitted resignation after he was accused of not bringing reforms in the food department and failure to regulate the hike in prices of wheat and flour.

Chaudhry said he has been illegally involved in the scandal, adding that all allegations against him are baseless.

According to the report of the FIA investigation, two main groups benefited from the sugar price hike crisis. The first was JWD, which is owned by PM Khan’s top aide Tareen and which obtained 12.28 percent of the total export subsidy of Rs3.058 billion during 2015-18.

The other is RYK group which has a portfolio of four sugar mills owned by Makhdoom Omar Shehryar, the brother of the sitting food security minister, as well as Chaudhry Munir of the opposition Pakistan Muslim League-Nawaz party and Monis Elahi of the PML-Q, which is part of the ruling coalition. Among them, they received a total of 15.83 percent of the government’s export subsidy, amounting to Rs3.944 billion, during 2015-18.

The document does not mention under whose influence the Punjab government issued subsidies to sugar mills or why the Economic Co-ordination Council (ECC) approved the decision to export sugar.

As per the report, the crisis originated due to poor planning by the Centre and provincial governments.

The report states that the Punjab Food Department was unable to control flour mills and started collecting wheat after a delay of 20-22 days.

The report revealed that former Federal Minister for food security Sahabzada Mehboob Sultan was involved in the wheat crisis. The report also implicated Punjab Food Minister Samiullah Chowdhury for creating the wheat crisis saying that the Food Security and Research Center kept the Economic Coordination Committee (ECC) unaware of the wheat procurement situation. The report says that the wheat and flour crisis in the country was a creation of the Flour mills Association.

The report further revealed that on December 13, 2019, the Competition Commission of Pakistan imposed a fine Rs75 million on the flour mills, which the association challenged in court.

The report states that the investigation procedure of the CCP is very slow as in 13 years, the CCP has only been able to recover Rs33.3 million of Rs27 billion imposed fines.

According to the report, Sindh did not purchase wheat for the province while Punjab delayed the procurement. Sahabzada Sultan was unable to provide a satisfactory answer in this regard.